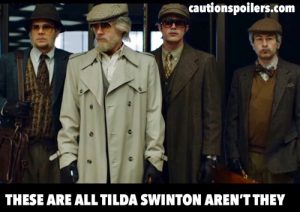 Only the privileged and those with nothing left to lose would decide to steal 12 million dollars’ worth of rare books from the local university library, after a planning process that mostly involves watching movies and searching online how to carry out a robbery. They even forget to buy the taser.

Not only do they not have a Plan B they don’t have much of a Plan A either.

These four young men are privileged, but as a jokey idea becomes a plot with a fixed end-date, what starts out as a funny romp that no one wants to back down from becomes a nightmare.

Real and make-believe merge seamlessly in American Animals. The true story of a rare books heist carried out by four college students in Kentucky in 2003, the real life protagonists, now in their 30s, speak directly to camera.

So at times do the actors portraying them, and sometimes actor and real-life counterpart sit together discussing whose memory is the real one. 15 year old arguments and slights re-emerge, as time has left everyone with a clearer idea of what happened compared to what they thought happened.

American Animals raises lots of questions about different truths and probable lies, guilt, and justice. And director Bart Layton does try to examine the uncomfortable realities of the story, though often his ambivalence towards their actions and their privilege is more troubling. The four young men may have been stupid and way out of their depth, but a woman was tied up, terrified, during the robbery.

The reasons behind the heist are still murky and half-formed. All the boys are from good families, they’re all good boys. They don’t even have any idea what they’ll do with the money. It’s more that one action leads to another, which is then passed to someone else, like a baton in a relay race – until they find themselves dressed up as four old men like a Last Of The Summer Wine comedy crime caper, about to rob a library.

The Real Spencer talks with great clarity and thoughtfulness about wanting to have a different life experience, as he’d realised that all great artists seem to have suffered in some way. The idea of wanting to be special pops up a lot – they’ve been taught that they’re destined for great things.

And the heist then gives them specialness, though it’s a complete bodge – my 9 year old could have taught these four something, after he spent his toddler years shoplifting sparkly things from Monsoon and sticking them under his pushchair til we got home.

But now a huge movie has been made about Spencer, Warren, Chas and Eric, so I guess now they are special. And while they’ve all lowered their sights regarding their goals in life, all are now doing something that utilises their botched robbery and prison experiences.

As if it wasn’t meta enough, as the car carrying the students drives past Real Spencer, we then have to factor in the influence on the story of making the story into a film.

Spencer (Barry Keoghan), Warren (Evan Peters), Eric (Jared Abrahamson) and Chas (Blake Jenner) are delighted with the planning they do, and oblivious to the rest. You don’t know what you don’t know.

It may be Spencer who lights the spark, but it’s Warren who tends the fire, pushing forward when everyone else, particularly Spencer, just wants someone else to put the brakes on so they can all walk away with some dignity.

It’s Spencer’s visit with other students to look around the Transylvania University library, including a tour of the always-locked rare books section looked after by librarian Betty Jean Gooch (Ann Dowd), that alerts him to the potential haul inside the glass walls.

He’s most interested in The Birds Of America, painted illustrations by John James Audubon, a 19th century businessman-turned-prisoner-turned-artist. Spencer can’t really remember telling his friend Warren about it. But soon Warren – the bad apple friend parents always want us to avoid – is searching online for how to commit a robbery. Then he’s found a fence for their eventual stolen haul (“what’s a fence?” asks the naive Spencer), before telling his friend he’s off to Amsterdam alone to check out a potential buyer.

Old friend Eric, a mathematician with dreams of joining the FBI, and old acquaintance Chas, a pumped up fitness fanatic with his own van, are roped in and their planning gets more serious. Warren renames them: Mr Pink for Chas, Mr Yellow for himself, Mr Green for Spencer and Mr Black for Eric. Even now, Real Eric mutters an angry aside that “it’s probably my least favourite Tarantino movie…” and Real Chas is still furious that he was Mr Pink.

Their imagined robbery is the epitome of cool. They’re all in skinny suits. The librarian, Betty Jean, is instantly tasered and collapses perfectly. The keys are easy to find, the books simple to steal. It’s a seamless process, to a soundtrack of Elvis Presley’s A Little Less Conversation. The real robbery, when it happens, is a mess, as the would-be robbers terrify their badly-tasered victim, sweat buckets, and generally screw up. Their escape is laughably bad.

The four real-life robbers are filmed separately. Real Warren, against a whitewashed wall, seems to be trying to hide how pleased he still is with what they managed to do. There’s a “we nearly made it!” sheen to his memories, though the reconstruction with Evan Peters shows that by the end, as their plan collapsed around them, he was as hysterical and hair-trigger angry as the others.

Real Spencer is filmed sitting in a workshop, the wall behind strung with tools, even though he’s an artist. He’s very handsome, like a young Anthony Perkins, and his observations delve much deeper than anyone else’s.

Keoghan is incredible as the terrified and lost Spencer, unable to extricate himself from the plan, and then almost frozen. Unexpected circumstances need a cool head and common sense, and they went ages ago.

And Peters is terrific as Warren, a bumptious man-boy built from hubris; there’s no jump to be made from Peters’ portrayal of the young man to Real Warren, who still seems to love the part he played, while simultaneously not wanting to take the blame as the others start to turn on him.

Watching American Animals is hugely exciting even knowing the outcome. What’s most interesting is their (lack of) motivation and the real men’s re-evaluation of their exploits.

The unravelling of participants and their plan is brilliantly done, but it’s a situation they got themselves into.