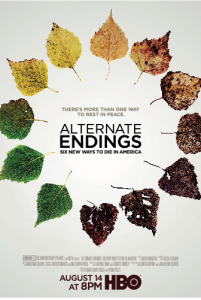 A funeral industry expert in the US predicts significant numbers of closures of traditional funeral homes over the next few years – in the death business, it’s adapt or die.

Funerals, like weddings, sure aren’t like they used to be. From tubs of Irish earth so expats can be buried in a part of their homeland, to holograms of the dead talking to their families, the innovations available at the National Funeral Directors’ Association convention make the average send-off look quite dull by comparison. They’re not even called urns anymore, but “memorial art”.

Though if it makes people happy, the recently deceased or those they leave behind, why not? My criteria for a good funeral are that the dead person would have loved it, and there’s decent food afterwards. And funerals are now so expensive you need to get your money’s worth. Americans are spending less though; in 2018 for the first time more were cremated than buried, meaning lost income for funeral directors. It’s mostly down to Baby Boomers; used to directing their own lives they want to direct their deaths too.

But while Alternate Endings is ostensibly about new ways to die, it’s more about the people (who are open, honest and generous) than the methods (which are interesting, and increasingly popular, though mostly didn’t strike me as new).

Last year my family suffered two bereavements; in the months after, I found a grief angle in every film I watched, from tales of trauma to the silliest comedy. Now I’m at that stage of enjoying a good wallow in memories of my late mother, occasionally lightly torturing myself re-running childhood arguments in my head before freaking out at the myriad ways I’m turning into her. Which makes it the perfect time for me to watch this fascinating, funny and heartrending documentary about how death is changing in America.

Directors Perri Peltz and Matthew O’Neill highlight six different types of death, or its marking. Some people are terminally ill, some died unexpectedly. One is a small child who died of cancer – I wept buckets over 5 year old Garrett’s story, and the elegant humility exhibited by his parents Emilie and Ryan.

The stories are more in the participants than their choices. In a world where we’re now so used to the therapeutic language of hope and healing that it can feel meaningless, their generosity of spirit and thoughtfulness, and how they express it, shines. Not everyone has everything worked out; it’s refreshing to hear the determined 70-something Dick Shannon declaring not knowing what comes next to be “bothersome”.

What stands out is that emotionally, socially, culturally and sometimes medically, death remains a process rather than an event. Our language makes it sound like a journey: passing, not dying. That journey can start long before the heart stops beating, and continues long after for loved ones.

Dick has cancer and is choosing the time and method of his death. Family and friends are supportive, tearful but with a streak of black humour they share with Dick himself: “Well loved. Get a move on. Mike”, scrawls a friend on his coffin lid at Dick’s party a few days before the end.

Barbara Jean is opting for a green burial, not just to lessen her impact on the Earth but to positively give something back with her own body. We find out little about her personal life but she comes across as a woman whose kindness made its own impact. Her family and friends are literally part of the burial process, carrying her body to her grave and replacing the earth.

Surprisingly one of the most emotional moments is the most technologically advanced: a tube of metal reaching for the stars in New Mexico. 45 families are sending loved ones’ ashes into space, including those of 65 year old Alfred “Tuna” Snider, who died unexpectedly. A joyously unplanned cheer goes up as the rocket shoots into the chilly early morning sky, its cargo also including the remains of a man whose mother memorialises him magnificently when she recounts how “his favourite phrase was ‘let me off this planet!'”

Dick Shannon isn’t the only one attending his own celebration. Guadelupe Cuevas in Texas has a living wake with his large extended family; his son Guadelupe Jnr speaks eloquently about how their lives have changed now he and his siblings have to look after their parents. “I got the best job in the world. I take care of Mom and Dad.”

Letting go is hard, even if people have chosen their way out. With Dick breathing his last I wondered if I would always cling on for a few more minutes if I could. As Leila Johnson and her mother arrange for her father’s ashes to become part of an artificial coral reef, she literally cannot let go of him even as his remains rest on the sea bed. Her grief is palpable, even knowing she’s doing what he would’ve wanted.

I was struck by the part friends and families play in helping the dying have their good death. It reminded me of The Farewell, Lulu Wang’s autobiographical film about an American-Chinese family returning to China because their grandmother is ill; no one tells her she’s dying, as in Chinese culture it is the job of the family to bear the emotional weight of an elderly person’s illness and death. In Alternate Endings the emotional weight is helping someone carry out their wishes, though the aim is the same as in Wang’s film: a good death unburdened by worries, a life celebrated.

For while Alternate Endings positions these as new ways to die, they include traditions we’ve abandoned: dying at home, washing a loved one’s body after death, becoming part of creation in a positive way.

The directors have found some amazing participants: America’s new bereavement pioneers, ordinary yet extraordinary. Still, it’s a shame that the documentary never makes any other connections about how death is, and has been, managed in the US, if only to add a little more context.

It’s decades since Jessica Mitford’s funeral industry exposé, The American Way of Death; and Elisabeth Kübler-Ross’s On Death And Dying, about how terminally ill people face their diagnosis and death. A film can’t cover every angle, but more comment on that funeral directors’ convention, on whether business is poised to take over the re-emerging autonomy of the dying or simply responding to need, would have been welcome.

How do I want to go? Painlessly (I’m a wuss), and without dribbling (I’m vain). And hopefully not until 2071 (I’ll be 100 and it would annoy my mother). No doubt my siblings will dress me in something hideously unfashionable afterwards to annoy me, too.