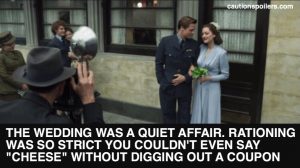 We’re in Casablanca in French Morocco and everyone is getting ready for the ambassador’s party. And it does seem like a lot of effort just for some vol-au-vents and a tray of Ferrero Rocher.

Maybe there’s not much going on entertainment-wise in French Morocco, there is, after all, a war on.

It’s 1942 and Max Vatan (Brad Pitt) has just been parachuted into the desert where he is picked up and delivered to Casablanca – where he is to meet up with his fake “wife”, Marianne Beausejour (Marion Cotillard).

She is French, he is Canadian pretending to be French, and they are both spies, rendezvous-ing in order to get themselves invited to the German ambassador’s party so they can assassinate him.

Their mission is successful in that they have one of those shoot-outs where nearly everyone else gets shot at least once except them, despite lots of German soldiers and armed guards appearing.

And then to London; after their success, Max asks Marianne to join him in England. She passes the security checks and is soon with him in Hampstead (say what you like about the war but there appear to have been no parking problems anywhere in London then).

Max has a desk job. They get married. Soon Marianne is pregnant and in a scarily believable scene gives birth to baby Anna in hospital during a terrifying nighttime air raid.

But it all starts to go wrong a year later, when Max is called in to be told that the British suspect that Marianne is someone else entirely: a German spy who stole the real Marianne’s identity after the French resistance heroine was executed. Max doesn’t know if it’s a test for him, or if she’ll give herself away as a traitor and he will have to execute her himself.

Allied has been criticised for being stodgy and turgid with little or no chemistry between the leads, and up to a point I can see why people think this.

The film itself hardly bowls along. And Marianne constantly sends out mixed messages about feelings and emotions in a fake marriage. In French Morocco she practically throws herself at Max, clearly desperate to have sex with him, even though then there’s a part of her she’s keeping secret – either because she’s a spy or because of what she has witnessed in France as a resistance worker when people don’t keep quiet. But she also says that “it works”, it being the friendships she has built up with Germans, because her emotions are real. And then when Max refuses to sleep with her in Casablanca in case it compromises their mission she sows further confusion by pointing out that “the mistake people make in these situations isn’t fucking, it’s feeling”.

But these supposedly contradictory comments, and the alleged lack of chemistry between the couple, aren’t surprising within the context of the film: Marianne’s character accounts for all of it. She’s an enigma to the end, and only when giving birth does she admit to Max that it is, momentarily, the real her.

And I don’t know how anyone could watch the love scene in the desert where they have extremely passionate sex in a small car with a sandstorm raging outside and wonder at the lack of chemistry. Short of jumping out and conger-ing naked down the sand dunes I don’t know what more they could have done.

One of the joys of movies set in the 40s is the outfits, and here Allied doesn’t disappoint.  Marianne’s clothes while she’s in Casablanca are simply ravishing: silk negligees and satin evening dresses, all topped off with cherry red lipstick and a cigarette. Once she’s in London and living in Hampstead, wartime shortages, ration coupons and a more humdrum day to day lifestyle understandably lead to a rather frumpier aesthetic.

Though the real victim is poor baby Anna. Baby and toddler fashions in 1940s England were clearly not up to much and the poor child has to wear a succession of awful knitted outfits with matching hats. I’m surprised Anna didn’t dob her mother in herself after making her wear those hideous creations. Sheer embarrassment could explain why the toddler does nothing but sleep.

Sometimes the randomness and cruelty of war is brought home to us. It’s shown clearly in the faces of a whey-faced young pilot off on his first sortie, and a horrifically injured soldier who Max visits in a rehabilitation hospital.

So you can see why everyone just wants to have fun, either in Casablanca or Hampstead, as they might be dead tomorrow. There’s a rollicking party scene in Max and Marianne’s little Hampstead terrace where clearly everyone is just living life as loudly and as fast as they can; with lots of drinking, drugs, sex in under-stair cupboards, and dancing round the chicken coop (that’s not a metaphor). It looks like a complete riot and is only interrupted by the blasted Hun and an air raid.

Pitt is entirely believable for the first half of the film, particularly in the early scenes in Morocco on the roof of their building, as Max struggles with Marianne’s instructions to be less reserved when she points out their relationship needs to stand up to scrutiny.

However from the moment Marianne is accused of being a German spy, Pitt seems out of his depth. Even when Max and Marianne are in their Hampstead kitchen with him sitting at the table and her bustling around, out of shot and unaware of the forces closing in on her, the long and supposedly heartfelt up-and-down looks he gives her just give the impression that he’s checking out her bottom rather than getting his head round who is betraying whom.

Allied is an entertaining wartime period piece with a knockout performance by Cotillard. It is a film of two halves, though it’s admittedly hard to make dreary wartime Hampstead – where apart from their party, the only exciting thing is picking mushrooms on the heath – look or feel as glamorous as Casablanca.

While the London-set sections are more interesting, as Max is forced to face up to Marianne’s possible betrayal, the louche glamour of French Morocco is hard to beat for allure, mystique and pure spectacle. Speaking of Casablanca, if I say play it again Sam, that’s a clue.