You are here: Home / Film Reviews / All Is True 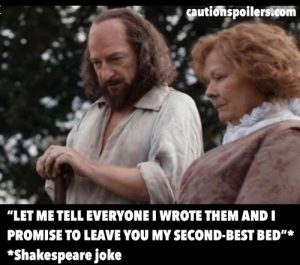 As all married women heading into their dotage know, if there’s one thing a just-retired husband needs it’s a hobby – and luckily William Shakespeare, newly returned to the rather chilly bosom of his family in Stratford Upon Avon, has his own ideas about that. Soon he’s measuring out a new garden, assisted by next door’s dog.

Life is different in Stratford – as his wife Anne points out briskly to William on a Sunday, it’s not like London and if he doesn’t go to church he’ll be fined. (The service is a battlefield of infighting and rather ungodly argument, where religiosity looks to be determined by hat height. Perhaps they felt it made them literally closer to God.)

The town is far from tranquil. In fact it appears to be a hotbed of intrigue thanks to busybody Puritans, and the rampant shagging of some of its other townsfolk.

William Shakespeare is someone who would now be labelled a multiple threat. If you think Kenneth Branagh did a lot to bring this film to the screen, directing and starring, wait until you hear the riposte the man himself gives to a local Stratford bigwig who has the temerity to denigrate his work.

It turns out William had a hand in pretty much everything to do with the Globe Theatre, so much so that it’s amazing he had time to write anything, let alone that astonishing canon of plays and poems.

There are a few surprises in All Is True, screenwriter Ben Elton’s imagining of Shakespeare’s final few years – and considering that a lot of what we claim to know of the playwright is conjecture and guesswork, according to Elton we know a surprising amount of actual facts about the twilight years of the great man’s life.

Much is still conjecture and guesswork in All Is True of course, and working out what makes that title something of a joke on us. We know Elton has invented a family mystery over the death of Hamnet, William and Anne’s son who died aged 11 in 1596, 17 years before the start of this film. (That title is the alternative name for his play Henry VIII, which was being performed at the Globe Theatre when it burnt down; a calamity which seems to have been the catalyst for Will’s retreat to Stratford.)

William still hasn’t properly mourned Hamnet (his wife points out, her tartness only partially hiding her distress, that while rest of the family – Anne, Hamnet’s twin sister Judith, and their older sister Susanna – grieved, Will went off and wrote The Merry Wives Of Windsor).

The boy’s death still casts its shadow over them though, as Will, presumably home for a long retirement (“I’ve just bought a pension. I can’t die for at least 10 years or I’ll be ruined” he jokes to Susanna) finds his return provides an outlet for Judith’s rage at the unequal treatment and love meted out to Hamnet compared to her.

Hamnet was a genius, a poet in the making. He could read and write while Judith, who was never sent to school, was illiterate. It’s a golden boy narrative that turns out to be very different from the reality.

His family are beset by scandal: Susanna is accused in church of fornication, while Judith finds her fiancé has got another woman pregnant. They’re treated briskly though, portrayed as simply the trials that a high profile local family must endure, compared to the central question of the circumstances of Hamnet’s death and its effect on those left behind.

The film is stunningly shot by cinematographer Zac Nicholson, with misty nights by a tree-lined pond juxtaposed with warm, mellow autumnal days. It often looks like an actual painting; particularly one scene shot from above, the only clue that it is a real landscape and not a work of art the tiny horse and its rider moving along a road towards the town.

The costumes – beyond the extraordinary black hats, which are tall or taller, wide or wider – seem to mimic their emotional positions; Bodices are thick, their peplums creating a barrier between the women of the family and their absent father. Susanna, with her Puritan husband, is all in black, most of her hair tucked away. Judith, wilder, angry and not willing to forgive, is in pale colours that match the autumnal hues outdoors.

This is a quirky, small-scale family drama and very episodic. Local dramas are quickly sorted (or so it seems). Famous names – his patron Henry Wriothesley, Earl of Southampton (Ian McKellen), fellow playwright Ben Jonson – appear for wonderful two-hander scenes then vanish. Wriothesley’s candle-lit conversation with Will spins and spars around status, remembrances and half-said truths.

All Is True is deliberately stagy and at its most play-like, terribly mannered. At one point Will, Anne, Judith, her husband and Susanna are lined up almost in a row outside under a tree, the Jacobean mansion a backdrop, to announce some good news, whereupon they all hug and shout for joy. All that was missing was a fool popping put from behind a tree playing a lute and singing hey nonny nonny. It reminded me of one of those travelling theatre troupes with a cast of five that risk all betting on the British weather to perform outside some country house.

Nuanced family relationships are juxtaposed with bawdy comedy: there’s a brilliantly joyless Puritan while the local booze-n-ciggies shop owner is a serial shagger. That Will ends up with both men as his sons-in-law just adds to the humour and the drama. Elton’s script is warmly amusing (though very exposition-heavy) and it’s great fun hearing about Will’s contemporaries, most of whom have lived enjoyably dissolute lives and are now therefore dead.

All Is True is an intriguing film that embraces its truths and its fabrications, weaving them into a series of little family dramas played out on a small stage. It is both bracing and comforting. What family doesn’t have secrets, or narratives that have taken on a life of their own?

This is a superb cast. Judi Dench as Anne is warm one minute and brittle the next, passive aggressive towards a husband who thinks he can just slot back in to the family when he wants to. Branagh is unrecognisable, his prosthesis giving him a perfect straight line down his nose, chin and beard. Now full of regret, Will – a father who has thought himself too important for the minutiae of family life – receives no sympathy from those whose support he had assumed. Battered from all sides, his hurt is visible in his eyes.

And the daughters too are excellent, particularly Kathryn Wilder as Judith – her pent up frustration and anger entirely justified, howling rage growing like a boil that has to be lanced by making her father face up to her truth.

Note: stay for the title cards at the end, as you’ll be happy-sad sighing in equal measure (and yes he did leave Anne his second-best bed).