You are here: Home / Film Reviews / All Between Us 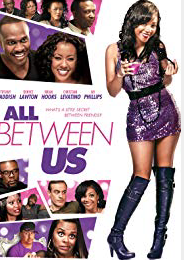 This dinner-party-from-hell movie was made in 2010, but is only now, eight years later, getting a home entertainment release – presumably to cash in on co-star Tiffany Haddish’s phenomenal (and well-deserved) success.

I’ll admit until I realised when the film was made I was rather mystified regarding Haddish’s involvement. It’s a story that has some interesting ideas but no cohesive centre, or sense of control.

With one main location (an apartment), and one main event (a dinner party), and a cast of (and I’m being kind here) oddballs, the movie’s eventual collapse into melodrama, as relationship-shredding secrets are revealed, is something that could have worked as an over the top farce; but to make chaos look chaotic you need, paradoxically, order and a strong guiding hand.

Without that, All About Us is at times incoherent, and leaves the audience feeling uneasy – should we be laughing at guest Freddie’s terrible musicianship or be scared by his aggressive and sleazy behaviour towards the others?

Having said that, Haddish is on sparkling form, and some scenes work well.

Clara (Denyse Lawton) and Ray (Brian Hooks) have been together three years and are now hosting a family-and-friends dinner in their apartment to celebrate their impending wedding. It’s a gorgeous loft-type apartment, the kind of place that leaves non-Americans like me unsure whether – like in Home Alone and Friends – it’s a realistic middle class home, or will need a plot point to explain it away. And it turns out it is beyond the couple’s means (Ray is an up-and-coming writer), and is part-paid for by her parents.

The guests are diverse personalities, almost designed to rub each other up the wrong way, and it’s easy to see such a party as completely unlikely; though actually it’s not entirely unrealistic. Many times I’ve invited too many then secretly prayed for a no-show, or invited the “wrong” people and spent the whole evening crossing my fingers that it’ll all be okay.

Clara’s best friend Mishawn (Haddish) and her white boyfriend Ty (Christian Levatino, who looks incredibly familiar but I can’t find much he’s been in) are first to arrive. Haddish is fast talking, bouncy, loving and funny as Mishawn, and even though her performance is nearly a decade old you can see how her acting style has evolved and finessed while still retaining her genuine warmth, talent and sparkle.

Neighbour Chad (Kevin DeWitt), a white boy from Nebraska, is sweet; he and hippie couple Channel (Isley Nicole Melton) and Billy (Mancini Graves) are the nicest characters, with the least to do. Channel is a terrific baker though, turning up with a tray of pot brownies and I think you can see where this is going.

Clara’s awful brother Freddie (Esau McGraw) and almost as awful wife Aubyrn (Tabitha Brown) have flown in for the dinner. Narcissistic and with a complete lack of self-awareness, they spend their time spreading the Word of Jesus, though only in pleasant locations. Freddie is far too aggressive which dampens any comedic relief the two could provide. Aurbyrn is awful with Freddie, but amusingly awful on her own.

I’m not here to crush the memories of people who put their all into a film eight years ago though. So what’s good about it? Despite the limitations of the script, which needed a sharper edit, most of the performances offer believable moments, and some are very good. Sam (Jay Phillips), Ray’s best man and best friend, has been in a downward spiral into alcoholism and depression since his girlfriend left him. He turns up drunk, and has a quite moving scene on the apartment balcony with Ray, who delivers a pep talk about life and love. Thanks to the two actors’ talent and tenacity with the dialogue they’ve been given, it does work.

Clara’s mom, officially know as Mrs Tillman, is more than just a foil for Mr Tillman. He’s rude and fault-finding, partly through habit and partly one assumes because he enjoys it. It’s a (mostly) fun performance from Carl Gilliard, with Mr Tillman (even I’d be too scared to call him anything but that) every girls’ overbearing loving dad but x 100. Sadly he does later slip into caricature as he’s simply too awful.

Mom (Connie Johnson) is calmer, more measured, but still blinkered in her approach to her son, praising Freddie’s frankly awful caterwauling and guitar playing and wondering why he isn’t on stage somewhere.

The women are more sharply drawn, but less sharp, than the men. Freddie’s wife Aubyrn is mean and nasty, and as a couple they are too much – too horrible to be watchable. Without him, chatting to the other women, she’s still unpleasant and snippy but entertainingly so.

Overall All Between Us is a missed opportunity. With the nastiness toned down, the comedy ramped up, and sharper direction, it could work well as a sitcom farce, or even a stage play: with increasingly awful people turning up, made worse by hinting they can sing, and with the addition of pot brownies. Unfortunately director Jamie Jones doesn’t rein in the cruelty enough; and the secrets, as they’re exposed, seem like unlikely melodrama.

The film is billed as a comedy and there are certainly some funny lines. I did like Ray’s line to Sam that life and relationships are “ups and downs, highs and lows” which we see in an entirely different light later on. Mr and Mrs Tillman’s arrival is initially great fun. And pot brownie-guzzling Billy is good value (and a necessary distraction) once the drugs get to work.

There’s also a witty flashback scene when Ray first “met” Clara’s parents over Skype, and they have no idea their criticisms of their prospective son-in-law can be heard and seen by Ray and Clara.

But it’s all a bit random, and the two leads lack chemistry with each other (though they do have with some of the other characters). There’s no gradual unveiling of secrets; it’s mostly clashing personalities until a big reveal at the end.

The fault-finding parents, the rude brother and sister-in-law, the hippy friends, the daft neighbour who gets stoned and mostly naked, the depressed drunk best friend – and the central couple, Ray and Clara, whose secrets are exposed too late for the interesting (and practical!) questions that they raise to be answered. It’s a hell of a lot to keep going, a plate-spinning exercise that requires a huge amount of skill from cast, director and scriptwriter, only some of which is delivered. The cast do what they can – some with more success (and more opportunity) than others.

Buy / rent all between us on vod or buy the dvd from amazon.com