You are here: Home / Film Reviews / A Violent Man 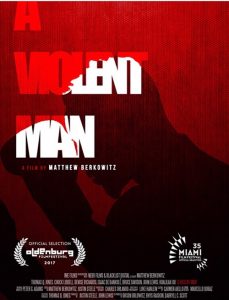 Forgive the pun but A Violent Man punches above its weight. I’m no expert on MMA – I’m a lover not a fighter. Well I’m definitely not a fighter, anyway.

But I still found a lot to appreciate in this low-budget thriller about a young man who finds that just when a potential path to success opens up for him, forces conspire to pull him right back down.

I say low-budget, but in the main the production values are pretty good, the story is well-paced and the fight sequences in and out of the ring are believably brutal.

Ty (Thomas Q Jones) is with his mentor and father figure Pete (Isaach De Bankolé) in the gym when he’s asked to spar with undefeated world champion MMA fighter Marco Reign. Not only does Ty win the bout, but a friend from the gym, Jameson, puts a video of it online, where it goes viral.

But after a meeting with sports reporter Victoria (Denise Richards) ends up with the two of them sharing a night of passion, his world starts to shatter.

Heading home in the early hours to girlfriend Whitney (an impressive Khalilah Joi), Ty lies that he’s been out drinking with Pete – but the next morning Victoria is found strangled, and Ty is the chief suspect.

The cops are convinced they’ve got their man: one focuses on Ty while his partner sows the seeds of doubt in Whitney’s mind about whether her boyfriend, who she’s only just found out is unfaithful, is also a murderer. The police don’t seem interested in digging any deeper, despite the industry backhanders that Victoria knew about.

Poor Whitney – she doesn’t know how to react. Already on his case for not having a proper job, sick of patching up his fight wounds every night, her reactions to Ty’s infidelity and perhaps more are confused to say the least. But Joi ensures she’s always believable as Whitney struggles to keep hold of the life she had planned out for them both.

I’ll admit I was very surprised at Denise Richards’ early demise; having read the briefest of plot outlines before watching, I assumed the reporter would be the one trying to clear Ty’s name.

Meanwhile a huge payday is dangled in front of Ty when Marco Reign’s manager, the richly shady Mr Green, suggests a fight between the two of them on Pay TV.

Ty is an innocent man and at times his own worst enemy. As a young black man and a fighter he’s stereotyped, punished for transgressions others would get away with; he then lashes out in ways that can only make his situation worse, his frustration and anger coming from situations over which he has no control.

Brought up in foster care before Pete took him under his wing, Ty’s route out is also one that pulls him back; and he doesn’t know how to avoid the traps being set for him by forces within the industry, the police, or even society at large.

“Are you a violent man?” asks cop Beckett in his interview. Victoria’s full-on flirting, witnessed by bar staff, is twisted to make him look aggressive. He’s goaded into fights. Previous actions make those closest to him suspect he may be guilty: “choke me like you choked her” begs Whitney as they have sex on the floor, horrifying him even though he has his hands near her neck.

It seems almost a kind of reverse-karma that Ty won’t be able to escape his background. Asked to leave a high-end jewellers’ shop, Ty is then welcomed when the security guard recognises him from the viral video. But the first jewellery he is offered is gold chains. He literally has to show them the money before he can look at expensive rings for Whitney. (It’s a slightly awkwardly filmed scene, beyond the subject matter itself. Also rather awkward is his sex scene with Richards, though to be honest I’m the same age as her and I’d probably keep my nightie on too.)

The big fight between Ty and Marco Reign is gripping even if I didn’t really know what was going on (in no way the fault of the film). It’s part controlled rage and part stillness and silence, as one struggles to hold the other on the ground. The venue is dull, dark blue and grey, with overhead shots of blue satin shorts incongruously shiny. Other scenes are red-lit. It’s a scrappy, slightly gloomy milieu.

There are some great touches. I loved the pathetic, whiny Boomer, filing a report about Ty after their fight outside the strip club – he’s whinging about a splinter in his finger when the scene switches to Ty putting his gloves on for his big fight, focussed despite everything that’s happened to him.

I’d have liked to see and hear more of Whitney and Pete –  both are rather underwritten. Whitney has little agency, and her scattergun reactions are perfectly convincing. Pete and Ty’s surrogate father/son relationship could have been explored more fully; there’s an interesting exchange between the two men just after Ty spars with Marco Reign where an under-confident Ty seems to be looking for reassurance from Pete.

Thomas Q Jones has a lot on his plate as Ty, a man now playing the game the way he’s been told to only to find the rules arbitrarily changing. It’s a solid performance, though there were times when I didn’t quite feel the sense of drowning panic that I would expect. Then again, maybe deep down Ty recognises his own powerlessness, and he’s actually simply resigned.

With A Violent Man, director Matthew Berkowitz has managed to create a thriller that works well within the confines of the genre.

There are also some twists and turns beyond the straight narrative thread that I wasn’t expecting; and to Berkowitz’s credit, it’s a film that follows through on its promises to the very end.