You are here: Home / Film Reviews / A Simple Favour 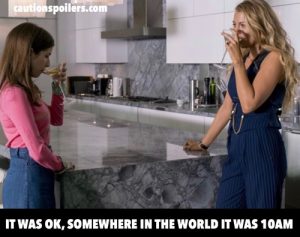 *** Not sure I can ever claim a review is entirely spoiler-free, but I haven’t included the twists and turns ***

Much like at-a-crossroads suburban mom Stephanie, A Simple Favour is a film that tries on different outfits, unsure what it really wants to be.

It certainly ticks a lot of boxes: thriller, comedy, satire, crime drama, love story. But tonally it’s all over the place, with the final funny minutes (which left me salivating for a sequel) at odds with the previous hour, itself very different to the movie’s first chapter.

There’s still a lot to recommend it though, not least the clothes, and two dynamic lead performances from Anna Kendrick as mommy vlogger Stephanie, and Blake Lively as mysterious fashion PR director Emily.

There are plenty of enjoyable minor characters who pop in and out too – particularly catty fellow class parent Darren (Andrew Rannells), shallow design genius Dennis Nylon (Rupert Friend), and the hilariously sardonic Detective Summerville (Bashir Salahuddin) who should be given his own cop show forthwith.

Stephanie is a widow, and desperately trying to fill that gap in her life and that of her son Miles, partly to stop her thinking about the guilt-inducing circumstances of her husband’s death.

She videos herself baking and tackling other family-related dilemmas such as how to make the perfect first aid kit. And she’s always first to volunteer for anything at school (because she genuinely loves it, not for the reason most of us do, which is to get our names down next to easy option “crisps” for the class Christmas party).

Emily is a sweary, afternoon martini-drinking businesswoman, never less than stylishly turned out when she (eventually) picks up her son Nicky. Her husband Sean (Henry Golding) is a novelist, though he hasn’t written anything in a decade (can you still call yourself a novelist in those circumstances, if you’re not JD Salinger?)

Their house is incredible, their finances are in trouble. After Miles and Nicky manoeuvre a playdate at Emily’s, she and Stephanie become something approaching friends, though it’s pretty one-sided. Emily has a knack for getting people to reveal their inner truths while her own relationship with honestly turns out to be somewhat tangled.

She enjoys constantly tightening the screws, as Stephanie desperately tries to agree with her, only to see the official finish line – the prize, genuine friendship – retreat into the distance.

Soon Stephanie is volunteering to collect Nicky from school, and the other parents, already mocking her, are seeing the situation for what it really is: free childcare.

But after Emily asks for “a simple favour” – collecting Nicky from school one afternoon – and the hours with no contact turn into days, the police become involved. It isn’t long before Stephanie too starts to investigate the circumstances of Emily’s disappearance, her background, and who might be responsible.

Despite her upset, this is a chance for Stephanie to find out who she really is and break out of the confines she and other people have set for her. And it turns out she’s not so different to the enigmatic Emily than we first think – both have secret pasts.

I say enigmatic, I’m surprised even a suburban mom would be so desperate to be friends with Emily that they’d put up with the exhaustion. Friendships should give you something in return, even if it’s sometimes uncomfortable, but the cost of being friends with Emily is high. Every utterance is judged, and the payback is small once you’ve found out where she buys her hats and suits from.

Stephanie, though, seems to gain strength from what she’s learned from Emily, and turns into a genuine sleuth, eventually using her vlog to track down leads into Emily’s disappearance. (Her subscribers also have a ghoulish fascination with the case even as they want to help.)

Sleuthing gives Stephanie a focus – as she blossoms, her wardrobe is more defined and refined, without becoming too Single White Female. Having previously laughed at the idea of dating a man from the city 90 minutes away, soon she’s off round the country tracking down Emily’s past. “The student becomes the master”, says Stephanie, her transformation almost complete.

Director Paul Feig doesn’t stop piling on the twists turns, with more big reveals than a z-list celeb in OK! magazine. I was quite exhausted by the end, and barely had enough energy to write down “buy sleeveless pullover” after seeing Sean’s TA in one (the most low key of the outfits, but I know my limits, being a suburban mom).

When it comes down to it Emily isn’t particularly interesting once the onion layers of her life are peeled away. This is a film more about the diminishing of Emily while Stephanie grows (not always nicely, and it’s testament to Kendrick that she plays her with an overlay of ambivalence).

Kendrick is terrific in her early scenes with Lively, her Stephanie a perfect example of diffidence and forwardness – how women are trained to apologise, to fill the awkward silences with nervy laughter, to make everyone else feel better.

She is constantly wrongfooted by her new “friend” who bans her from saying sorry and yet leaves criticism and mockery hanging in the air. Her transformation into Nancy Drew just about works, and I liked the gradual realisation that actually she’s thoroughly enjoying the Emily / Sean melodrama, and her own growing importance within the story.

Lively too is very impressive as the damaged Emily, accidentally giving Stephanie all the power she needs. Emily suffers in the working mom / stay at home mom debate, not that she’d care. Usually dressed in gorgeously-cut suits, teamed with ties and cravats, she’s  broken out of the stereotypes, caring nothing for people’s feelings (apart from her son’s), and is hugely successful in business. She’s ruthless, yet part of the criticism of her is that she uses people for free childcare. Sean, working at a nearby college for far less money, is never criticised in the same way (and never seen at school). It’s like an old fashioned morality play with a school mom chorus, as the two women, at various stages of escape, do battle – when they themselves still feel something for each other.

It’s hard to know what to make of Golding. I’ve seen him in two films now and both times he’s played a weak-willed man supported financially by others, with women squaring up around him. Here again he’s more of a pillar for Kendrick and Lively to hide behind, as they stalk each other.

A Simple Favour is enjoyable, but it’s so busy a lot gets lost. There’s nothing wrong with merging genres – there are simply too many stirred into this potboiler. The comedy is uneven, though the thriller section is gripping and fascinating as it unfolds – and trying to second guess plotters and double-crossers is always fun.

I would have liked the credits to include Stephanie’s recipes and Emily’s designers, though.

Watch the A Simple Favour trailer: