You are here: Home / Film Reviews / A Friend In Need (Short Film) 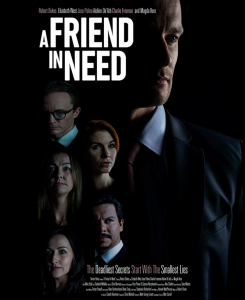 A Friend In Need brought to mind that (probably apocryphal) Mark Twain quote: “I once sent a dozen of my friends a telegram saying ‘flee at once – all is discovered.’ They all left town immediately.”

Here it’s affairs, drugs, crimes against fashion (I’m looking at you, Patrick), and being rude to a pole dancer (you again, Patrick!). Two are enough to bring down a marriage, possibly all four if you’re particularly offended by sartorial inelegance and bad manners.

“Short” is a nebulous term which it comes to films. I’ve watched (and even judged, literally) films that vary from four minutes to 40.

Director Matt George Lovett’s A Friend In Need comes in at around 35 minutes, a good length for a thriller that needs time to set up the characters, and drop enough clues and red herrings so we aren’t finding out everything via clunky spoken exposition.

Increasingly short films are being remade as feature films at a later date, though they still have to stand on their own two feet as self-contained works of storytelling. This would make a good feature, but it also works as a half hour mystery.

“If we’re out drinking with Mike we’re not piss-heads any more” says Chris. “We’re angels of mercy!” agrees his colleague Patrick, as they plot the perfect alibi.

Chris (Robert Dukes), Gianni (Jose Palma) and Patrick (Charlie Freeman) are brokers; but while they first appear to be tight-knit as they work hard and play hard, increasingly it starts to look as if the ties that bind them together are more sinister than friendly, and prone to unravelling.

They’re out a lot, to the annoyance of their wives, women whom their husbands moan about behind their backs now they’ve had children and stopped doing “sexy”.

The men’s excuses for their frequent absences for home are all based around “Mike” – an Iraq veteran with family problems and a son called Timmy, or is it Tommy? Anyway he’s a client of the brokers who needs a lot of support that can only be given in pole-dancing bars or at the races.

Mike doesn’t exist, but he’s a convenient excuse for after-work drinking and affairs. Until he starts writing to all three men, threatening to expose them to their families.

The middle-class moneyed setting is very well done; it’s all brunches and barbecues, with the wives and children running round a big garden, the men sneaking off to argue and blame each other and scratch their heads instead of each other’s backs.

Gianni is the most laid back, physically softening as he enjoys the benefits of client entertaining. Chris, tall, thin and increasingly nervy, with a wife and a cute daughter, likes to think he’s a good guy but his behaviour belies it (Dukes reminds me of a blond Rupert Everett in his early roles, buttoned up but increasingly fidgety as worries threaten to overwhelm him.)

Allegiances melt away, re-form and harden as three people (always an awkward number) accuse and excuse.

I loved the conversation between Chris and Gianni, berating themselves for their bad behaviour but only because they now face consequences; their conscience-wrestling somehow absolving them from actually stopping. This and the moaning about their wives’ general letting go will strike a chord with many.

Patrick turns out to be more of an outsider even though he most fits the stereotype of the high living finance guy, in pastel shirt with a salmon pink cashmere sweater knotted loosely round his shoulders.

Until something terrible happens, presumably instigated by Mike, whoever that is.

This is an entertaining and polished film about trust and how well you really know someone – I was intrigued from the beginning.

And though I soon made my mind up whodunit, that was followed by quite a long period where I decided I was completely wrong and settled on one (well, several if I’m honest) other suspects.

Dukes (who I last saw in the accomplished World War 2 short The Code) is a terrific Chris, hoist by his own petard as his behaviour leads to his world collapsing around him, his wife and child collateral damage. (He also has most of the screentime which – in a film of this length – gives him considerably more scope.) The wives are understandably quickly drawn; there are flashbacks too, though it wasn’t immediately clear that’s what they were.

A Friend In Need loses out a little on tension, but that’s because of its length – it’s hard to build affection for characters who are flawed but we would still, with a longer run-time, root for. In fact as a feature A Friend In Need would work extremely well: more time to introduce more characters, deeper affection for the imperfect characters already there, and a slow-burn approach as the paranoia rises.

I should also mention Elizabeth McNally. She’s only in one scene, as Roma Scott, the solicitor brought in when the walls start crashing down – but it’s a long one and she’s excellent. No nonsense, abrasive, frustrated, and most importantly entirely believable.

A Friend In Need has already won several awards including:

Watch the trailer for A Friend In Need: