You are here: Home / Film Reviews / A Dog’s Way Home 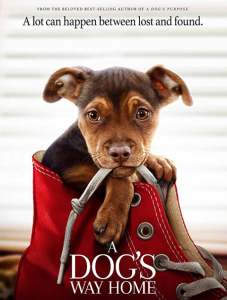 “I thought that was turning into The Revenant at one stage” said my friend as we came out of the cinema, rather glum small children in tow.

And A Dog’s Way Home is an odd mix of warm family film, bleak drama and public service broadcast, as poor pitbull Bella (real-life rescue dog Shelby) is faced with threat after threat attempting to cross the Colorado wilderness back to her owner Lucas in Denver.

Lucas (Jonah Hauer-King) finds Bella as a puppy living under a dilapidated house scheduled for demolition. He takes her in, even though their landlord doesn’t allow pets. Helped by his mum, forces veteran Terri (Ashley Judd), the two of them manage to keep her something of a secret, though like all cute movie dogs she’s prone to escaping or making herself known when she’s meant to be quiet.

Soon she’s supporting the injured veterans in the local centre where Lucas works and Terri has her therapy sessions; and even though I’m not much of a dog lover I did well up as she focused on exactly the patients most in need of her.

The set up goes on for some time, and I was wondering how Bella would end up hundreds of miles from her home in order to start her journey. Step forward half-sinister, half-comedy villain Chuck the policeman (John Cassini), who is in the pay of the not particularly threatening Gunther, a developer who holds Lucas responsible for his blocked permit on the lot where Bella was found.

Chuck is determined to take Bella into custody, for the crime of simply looking like a pitbull – under Denver’s dogs laws she can’t ever be out on the streets or she’ll be taken in and possibly euthanised.

Lucas sends Bella to New Mexico to live with the parents of friend and coworker Olivia (Alexandra Shipp), but Bella has been taught to “go home”, and soon escapes, to start a 400 mile trek across Colorado to find her owner.

It’s a long journey, for us as well as her, with something terrible happening just when you think she might be on the home straight. The trials she faces highlight her empathy with humans and her fellow creatures; her tenacity of spirit is exceptional as she faces down poachers, an avalanche, a pack of wolves, and being attached to a dead body with a chain not quite long enough to reach water.

And then people keep taking off her name tag, which doesn’t help.

It’s a brutal trip, though in some ways the film addresses difficult truths: a mountain lion is shot dead by poachers, leaving a cub (obviously CGI) whom Bella befriends, naming it Big Kitten.

But while man’s inhumanity is highlighted, the movie has a harder time dealing with the natural order of things. After Bella tries and fails to catch a rabbit to eat, she soon learns to hunt for food in waste bins or find humans who will feed her, and never again tries to eat a living creature. Not a cute furry one, anyway.

I’m not entirely sure who its audience will turn out to be. A Dog’s Way Home will be too sad for some small children despite Bryce Dallas Howard’s warm and guileless voicing of Bella – she manages to tread that fine anthropomorphic line between explaining to kids why Bella makes the decisions she does (not always understanding human behaviour or language) without falling into overly cutesy territory.

The other performances are mostly fine. Judd is always a classy presence, though some of the minor characters are caricatures (Chuck looks like he’s wandered in from yet another Home Alone sequel).

Sometimes it does feel like we are being lectured. The Denver law is certainly something that needs highlighting (according to the film three police officers only need to confirm that they think a dog looks like a pitbull for it to be taken away if found on the streets – “racism for dogs” Olivia calls it), but it’s rather clunkily explained. Other situations are handled extremely well. At one point a gay married couple take Bella in, and their relationship is completely unremarked upon. (I mention it because it struck me how unusual that still is.)

Dog lovers will adore this film – she’s not the only canine in the frame, with One Tooth, Crazy Hair and Shaggy Butt also helping Bella on her adventure.

It did leave me (mostly) cold, probably because although I do have a dog – the best dog in the world, obviously – I’m really more of a cat person. (Dog owners who aren’t dog people are a bit like parents who didn’t want kids, then had one baby and adore it – but only their own, while tolerating their friends’ children and finding everyone else’s annoying.)

Having said that, at the very end, when (is this really a spoiler?) Bella makes it home, I was briefly a teary-eyed mess. Though she still has another hurdle to overcome – honestly I was starting to wonder if Charles Martin Smith was actually a pseudonym for the directors of John Wick, who did for poor Daisy the beagle so brutally.

A Dog’s Way Home is a familiar story about the iron-strong bonds animals can have with their humans, though perhaps with rather too much gloom for its target audience. It makes for an uneasy tone. My 7 year old found parts of it extremely sad and I did have to whisper to him during the film that it was definitely going to have a happy ending. (He later asked me if there was going to be a sequel explaining what happened to Bella’s mum, who is taken away by the dog catcher early in the film. I very quickly changed the subject.)

It’s gorgeously shot by cinematographer Peter Menzies Jnr though, and the scenes of Bella climbing a mountain, a vast dark blue lake behind her, or blankets of thick snow weighing down branches, are not only stunning but give a flavour of the size of the task she’s undertaken.

Watch the trailer for A Dog’s Way Home: