You are here: Home / Film Reviews / A Dog’s Purpose 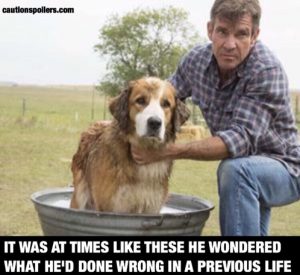 “Is there a point to any of this?” muses Bailey, one of many dogs that are actually the same dog in A Dog’s Purpose. And I’d be lying if I denied I hadn’t thought that about the film itself a couple of times.

Contrived and emotionally manipulative, with a plot you’ll guess within the first few minutes, there’s a lot wrong with Lasse Hallström’s latest, A Dog’s Purpose.

But despite the story-by-numbers approach it won me over, and my 7 year old thought it was brilliant. Let’s face it, sometimes you just want to enjoy a cathartic emotional wallow while watching puppies with adorable floppy ears bouncing joyously through a cornfield.

Will you find something in your eye? Probably. Because this is a film with several dog deaths, though it’s actually one dog who lives several lifetimes and is reincarnated between each one, retaining memories of all those lifetimes, as it tries to work out why it exists at all – quite literally what is its purpose?

Talk about setting the bar high; that’s got to be one of the top three questions ever asked, along with where do babies come from and how do astronauts go to the toilet (well from my children anyway).

Josh Gad narrates the film as dogs Bailey / Ellie / Tino / Waffles, and he does wonders with what is often quite weak material. His charming delivery and comedy skills left me laughing loudly at lines that in retrospect probably weren’t that hilarious.

The stories of red retriever puppy Bailey and his young owner Ethan make up the bulk of the film, starting in the early 1960s. As Ethan grows older he becomes a football player, and falls in love with Hannah, always with Bailey by his side. After Bailey’s death he/she is reincarnated several times, becoming Ellie, a German Shepherd owned by police dog handler called Carlos; Tino, the tiny companion of a college girl called Maya; and Waffles, a Saint Bernard acquired by a neglectful and abusive couple.

All of these people have issues around relationships and happiness, and the-dog-with-many-names tries to help its different owners to move on or simply step out of their comfort zones.

The film isn’t that long but parts of it really drag while other sections rush by, and this uneven quality makes it quite hard to really engage with it. Unsurprisingly, given the focus on Ethan and Hannah, the other lifetimes are quickly told and the characters are very broadly drawn. Still, some of the actors manage to do a lot with what they’ve been given, and I certainly wanted to know more about one or two, particularly college girl Maya (Kirby Howell-Baptiste).

There are some good jokes. Bailey is convinced the family cat is just a dog that needs training in dog ways, and he chases the stroppy feline round the house shouting “sniff me, sniff me!” (which I can tell you all right now is a line that is never going to work). There’s also what I can only describe as an in-joke about cat fights, and without spoiling it you need to look out for what’s playing on TV screens during the movie.

The performances, when they have much material to work with, are pretty good in the main. KJ App (teenage Ethan) and Britt Robertson (teenage Hannah) have good chemistry even if their sweet relationship is one we’ve seen many times before. Dennis Quaid plays older Ethan and while he’s dourly good he’s not in it that much.

The historical settings are shown mostly through the clothes (which I loved) with the odd current affairs line thrown in: “We’re three seconds away from nuclear annihilation” warns dad ominously when everyone else in the family is a bit too distracted by Bailey’s jolly, chicken-chasing antics.

The sheer number of dog deaths mean it’s not really a film for small children, unless they’re going through their bloodthirsty phase; there’s also a scary fire scene and of course that looming nuclear annihilation.

Older children may find it useful to talk about death especially if they’re already lost a pet (my 7 year old spent the afternoon afterwards – when he wasn’t shouting “MUM WHY CAN’T WE HAVE A DOG!” – talking about his cat who who died a few years ago). But parents will know best whether this is the right film to use as a springboard for discussing those kinds of issues with their own kids.

Most of the dog people I’ve spoken to about this movie won’t hear anything against it, so it’s clearly striking a chord with them.

As for the dog’s purpose, yes of course we find out what it is. I won’t give it away for you but if you want to guess, think Oasis album titles.

buy on dvd or blu-ray on amazon uk

buy / rent on vod or buy dvd or blu-ray on amazon.com

Watch the trailer for A Dog’s Purpose: