You are here: Home / Film Reviews / A Caribbean Dream 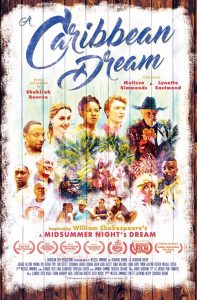 “Mystery and magic… true love is tested” says a man playing music in a forest, perfectly summing up what follows, while a cockerel rests on his head.

This is A Caribbean Dream, Shakespeare’s Midsummer Night re-imagined in Barbados, with a diverse cast and a setting far more enticing than any outdoor performance I’ve sat through in the UK; when nymphs danced round country-house rhododendron bushes and we all drank warm white wine while shivering under tartan picnic blankets, praying for The End.

This new version, directed by Shakirah Bourne, is a lushly beautiful delight, thickly painted in bright colours, while showers of golden sparkles add a Tinkerbelle-like charm to proceedings.

This is a love story, and as Lysander (Jherad Allenye) points out “the course of true love never did run smooth”.

Hermia (Marina Bye) is promised in marriage to Demetrius (Sam Gillett), but she is in love with Lysander, and (amazingly! this is Shakespeare, after all) he is in love with her. Hermia is told she must marry Demetrius or forfeit everything, so the young couple flee into the forest.

Poor Helena (a scene-stealing Keisha Pope) pines for Lysander, but the more she pursues him (via mobile phone of course) the faster he flees, usually towards Hermia who just wants him gone (the engagement photos as Hermia tries to escape his embrace, embarrassed horror on her face, are a hoot).

Meanwhile a group of fisherpeople are creating a play for a talent contest; bringing to life, in inimitable style, The Untold Story of JaJa and The Young Becca (and I almost certainly haven’t spelt that title correctly), an old legend about a man who started off a slave and rose to prominence and power.

The eventual performance is hilarious, the perfect encapsulation of those times when one very keen thespian friend ropes in all those mates for whom a stage is a living hell. Bottom (Lorna Gayle) in particular is a delight throughout, and if I wasn’t here typing right now I’d be with them, waiting at the “constipation statue” (I doubt that line – a mishearing of “emancipation statue” – is in the original but you’ve got to admit it fits with Shakepeare’s love of bawd and fart jokes).

The dialogue is a mixture of the original Shakeseparean prose, and modern day speech, but it never feels forced moving from the beach, to the dream-like and magical fairy kingdom in the forest, to the frenzy of the modern day carnival (everything linked by rhyming couplets).

The Shakespearean sections are stagy, deliberately so. They’re set mostly in the nighttime forest, or in the beautiful pale green wooden house owned by Theseus and Hippolyta where servants in smart uniforms offer pastries, the butler pours drinks which literally sparkle, and cleaning girls almost dance as they move in formation.

The forest, the domain of Titania (Susannah Harker) and Oberon (Adrian Green), is thick with colour, under a dark blue night sky. Titania looks like a rather sunburned Heidi, her thick blonde plaits coiled round her head and her skin glisteningly pink and gold. As she rests later, Peaseblossom the fairy fluttering around her, she looks lazily indulged, a perfect, creamy concoction.

Oberon meanwhile is a brooding and occasionally menacing presence. Asking Puck to use a love potion on Titania so she falls in love with the first living creature she sees on waking, is, in modern parlance, highly problematic.

Later the same tactic is used, accidentally, on Lysander, causing him to fall in love with Helena. Hermia and Helena’s resulting fight provides some brilliant insults that we should all start using forthwith: “You house-hopper. You fart-blossom. You thief of love!”

Patrick Michael Foster’s Puck is great fun, a Shakepearean Quentin Crisp, with his nifty suit, hat, pink lipgloss, and blusher. Cheeky and sneaky, he’s a provocateur, a troll, who holds no torch for anyone but will happily ignite a fire then sit back to see what happens, delighting in the unfolding events.

Without wanting to spoiler a 500 year old play, suffice to say that like the best Jane Austens, it finishes with a triple wedding. And of course that performance from Bottom and friends: “a fine tragedy very notably discharged,” comments Theseus rather archly, the only example of damning with faint praise you’ll get in this review.

For those of you who’ve been put off Shakespeare by the three to four hour running times of some of his plays, or have sat in darkened theatres resisting the urge – when yet another case of mistake identity arises – to shout out “just tell them your bloody name!”, A Caribbean Dream offers welcome respite, coming in at a nifty one hour 20 minutes.

It never outstays its welcome and fairly bowls along, which also means any shortcomings aren’t really given enough screen time to be noticeable.

It’s an excellent introduction to one of his loveliest plays, in an accessibly modern setting. And while cutting so much is always going to mean losing some depth, it is still a rather magical retelling of an age-old story.

“More strange than true. Lovers and madmen have such seething brains, such shaping fancies as apprehend more than cool reason ever comprehends” says Theseus (Aden Gillett) to Hippolyta (Sonia Williams) at the end, an older couple for whom love is probably less of the electric shock to the system which it is for the two young couples, whether induced through magic or hormones. (And what, after all, is the difference?)