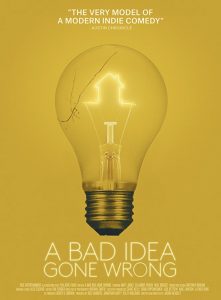 “This is the saddest heist in the long-storied history of crime” says first-time burglar Marlon as he and fellow future felon Leo attempt to escape from a house they’ve broken into and are now unable to leave.

That title is accurate and inaccurate, luckily for the right reasons. This is an engaging movie with a bouncily witty script; lifted higher by three leads whose chemistry drives what could, in the wrong hands, have ended up a rather nose-wrinkling tale.

Marlon (Matt Jones) and Leo (Will Rogers) are two young men going nowhere. Leo is nervy and jittery, obsessed with both his ex-fiancee Jessica, and Niagara Falls.

Marlon, named not, as people keep suggesting, for the similar sounding fish but for the least well-known member of the Jackson Five, is calmer but bumbling.

Completely skint, they’ve resorted to planning a heist to make some money. So many places aren’t suitable for a hold-up though: the flower shop for one, since Leo met the daughter of the owner and they actually got on pretty well.

Eventually it’s Leo who suggests a fancy house he’s found in a gated community. But if they think it’s going to be hard breaking in, it’s even harder to break out.

And breaking out is something which becomes necessary when, after successfully getting inside, they accidentally arm the alarm system. If this sounds rather too aggressive as you proudly sellotape a fake alarm box to the front of your house and train the cat to switch the lights on and off while you’re at your nan’s for tea, it basically locks the house so the two men can’t get out. Not without the access code anyway. And making a run for it will bring the security team running.

And they’re brighter than they look, as they know full well that nearly everyone writes the code down somewhere, even if it’s ACCESSCODE with the O changed to a 0 and a 1 at the end. If only they could find it.

But as they wander from room to room, they discover they’re not alone in the house. Despite the occupants being away, there’s a young, attractive woman asleep on a bed upstairs, who, when she wakes up, tells them she’s the house-sitter.

I’ll admit I was prepared at this point to start sighing. It’s not easy to make a storyline funny when a woman asleep in her underwear is woken by two masked men before being tied up, even if we know they’re basically good guys really.

I’m 47 and I’ve seen far too many unpleasant and unfunny references over the years that I’m supposed to laugh at to demonstrate my ability to take a rape joke. But writer-director Jason Headley handles the set-up with aplomb; and what could have been a sleazy or even scary scene played for laughs at women’s expense, is actually genuinely laugh-out-loud funny.

First of all the men’s masks are made of whatever they could find as they rifled through the kitchen. (I suppose if you break into the house of a woman too cool to wear American tan tights then you have to think on your feet.)

Neither man looks scary, though to be honest whenever I see clingfilm and silver foil together my first thought, after a decade of indoctrination from my local council, is “only ONE of these is recyclable.”

Plastic-wrapped Marlon, with his staring eyeholes, looks like a horror film psychopath who’s borrowed the skin of one of his victims; with his shiny silver foil visage Leo most resembles a broke teenage Cyberman at a Doctor Who convention.

And Leo’s been cutting corners (not literally on the foil I hope, as – Mum Tip ahead – foil blunts scissors) so his mask soon falls off, leaving him entirely identifiable; though kudos to the two men, they don’t then decide to kill her.

And she can’t go anywhere as they’ve wrapped her up in a sheet before taping her up, as simply taping her would hurt her skin and “we’re burglars not assholes”.

(By the way – second Mum Tip ahead – did you know that there are little cardboard tabs at the ends of the long boxes for clingfilm and silver foil, which you push in and hang the roll on so it’s easy to unravel? Next time take me along with you, Leo and Marlon, I’ll win you the 11.11am Impossible Question competition on that local radio station you love at my first attempt.)

The house-sitter, Darcy (Eleanore Pienta), isn’t happy at being disturbed, and soon interrupts their joint-casing with a plea to use the bathroom. Leo accompanies her; and really, when she claims it’s for a number 2, they should realise she’s scamming them. (If only young people today didn’t see Sex And The City as too problematic to watch, they’d have known the series broke the bathroom wall years ago to point out women will hang on for a whole weekend if unable to get away from a guy to do their business.)

Before he knows it, she’s strangling him with a dressing gown cord, though after being released (with the dreamy claim that “I saw clouds, people made of clouds”) it turns into a rather sweet “how I met your mother” story for the future, as they practise consensual throttling as foreplay.

Rogers and Jones perfectly embody that type of man who is madly jealous of anyone more successful than them, while trying to hide it beneath a blanket of supercilious judgement: “If they were just a little more humble we wouldn’t have so many rooms to look through” complains one as they traipse from room to room looking for the access code and any easy-to-carry valuables.

Pienta is a joy, holding her own from the off, her Darcy a self-sufficient young woman who lives by her wits, changing direction as her plans are interrupted and she’s forced by circumstance to team up with the two men.

This is a bumbling burglars comedy with holes big enough to escape through. But it doesn’t matter, as it’s such an enjoyable romp (particularly if, like me, you like nosing around rich people’s houses).

Headley never lets up with the pacing, and the introduction of another character near the end stops Marlon, Leo and Darcy having it all their own way. It’s a polished and accomplished debut.