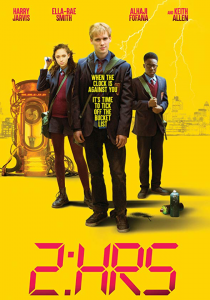 2:HRS is odd. Definitely quirky, sometimes befuddling, with lots left, intriguingly, hanging. At times it feels rather like one of those occasional Doctor Who episodes which has no Doctor in them, a sort-of sci fi tale set identifiably in the UK with ordinary people having to step up when life surprises them.

Tim (Harry Jarvis) is a joker at school and a bully at home, spending his evenings spraying graffiti around London. His father is dead, and Tim responds by making life as difficult as he can for his mum, while his younger sister Shona struggles to internalise her grief and pain so as not to cause her mother more distress.

And he is really mean to Shona. Nervous about that day’s school poetry slam, she’s desperately trying to learn her poem. “You don’t need to worry about the poetry comp,” he tells her. “You’ll be crap anyway” before sneaking her printouts into his bag.

But after illicitly testing out new tech invention the Vitalitron on a school trip, he discovers he has only two hours left to live – and has to decide how wants to spend the short amount of term he apparently has left.

There are a lot more questions raised by the technology than answered. The Vitalitron itself has a very homemade feel to it, and looks like a cross between a jukebox and an arcade slot machine.

But I liked the film, more and more as the story progressed. There’s a resolutely British humour to it, and it’s entirely anchored in the teenagers’ world.

At school Tim is in love with fellow pupil Georgia, but is completely unaware that best friend Vic (Ella-Rae Smith) is in love with him. Probably for the best, as their friendship group also includes Alf (Alhaji Fofana) and we all know what happens when two people in a group of three pair up.

It’s on a school trip to the Natural History Museum that the trio breaks free, desperate to escape their boring teacher, glumly and needily intoning to the class by the diplodocus (and I was glad to discover I’ve been pronouncing that correctly all these years, despite the attempted invasion of “dip-loe-doe-cus”).

Heading into the bowels of the building, they find a gloomy tunnel and at the end of it the slightly mad-eyed and very mad-haired scientist Lena Eidelhorm (Siobhan Redmond), announcing a huge scientific development to what looks like a handful of journalists, enticed there by the prospect of a high-carb buffet.

Her big invention, the Vitalitron, is a personal doomsday clock – stand inside to be scanned and it’ll tell you exactly how long you have left. Backing Lena up via video conference is a shadowy and mysterious industrialist, Graud. I say shadowy and mysterious, he’s played by Keith Allen so they’re probably not the right words. But he isn’t who he says he is; he’s actually a debt-ridden Brit called Mr Thompson, whose window backdrop of New York is as fake as his rather scattergun American accent. (Graud is never entirely explained, which I rather liked.)

Tim, being both a daft kid and slightly nihilistic after the death of his father, gets in the Vitalitron. Nobody seems to know if the machine is accurate. Is it even meant to work at all, or is it a big con from Graud? But the three friends set off to complete a rather hurriedly-written bucket list, just in case.

Actually they seem to believe fervently that he will die and are all remarkably calm about it. His list is rather sweet, and very local. They can’t get far in two hours, and they spend enough of it running and cycling around the streets as it is. There’s no point demanding to swim with dolphins when you’re miles from the sea and the transport links are rubbish.

And of course it’s really about finding out what (and who) is really meaningful to you, and pushing yourself to succeed. “Sometimes you have to really go for it. Do something that really scares you” says Vic as Tim tackles his fear of heights.

In some ways 2:Hrs follows a very British comedic tradition. Two journalists – like an Aldi version of David Walliams and Matt Lucas, the packaging and contents nearly the same but not quite – chase Tim and his friends down. They’re very funny at times, and far too much at others.

A teacher spouts what she thinks is cool kid talk; not particularly original, though she does manage the most natural-looking pratfall I’ve seen in a long while. And there’s a thuggish gallery owner with ART tattooed across his knuckles (spelled correctly, the counter-culture editors among you will be pleased to know).

This is a diverting movie that does get better as it goes on; the resolution ultimately surprised me, after initially following its expected trajectory.

The three young leads are good with Harry Jarvis in particular delivering a nuanced performance as Tim in a role where it would be easy to offer over-the-top shrieking and declaiming.

But the real standout is Fabienne Piolini-Castle, who is astonishingly good as Tim’s sister Shona. She steals every scene she’s in (and she’s not actually in that many of them). It’s a touching and moving performance of a fatherless teenage girl who struggles on, trying not to upset her mum, only able to give voice to the bullying and general nastiness of her brother in her poem for the school Poetry Slam.

2:HRS may not be groundbreaking teen moviemaking but it’s diverting fun, with its kids’ TV/1970s science-fi show vibe. I’d like to see what first-time feature director D. James Newton does next. With a bigger budget how much of his quirky, slightly off-centre eye would survive?

Watch the trailer for 2:Hrs here: