The camera sticks closely to Lance Corporals Blake and Schofield, two young soldiers sent on a mission to stop British forces going over the top into a German trap.

They jog through sandbagged trenches and warily crouch their way across No Man’s Land, an alien landscape where bodies hanging on barbed wire are used by their surviving comrades as navigational landmarks. 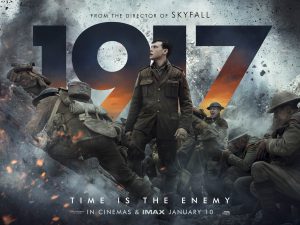 The Germans are supposedly in retreat, leaving their impressively-organised trenches and equally impressive rats (“even their rats are bigger than ours” comments Blake when he sees them).

Colonel MacKenzie – a man of whom a British officer en route says “some men just want the fight“ – is planning on attacking them in their new position the next day, unaware he’ll be sending 1600 men into a massacre. General Erinmore (Colin Firth) needs to stop them, using the fact that Blake’s older brother is one of those 1600 as leverage to ensure he won’t give up.

1917 wasn’t filmed in one take, though it’s been cut to look as if it was done in two (there’s a blackout in the middle, to allow for a time jump). And while the camerawork takes some getting used to, there’s much more to 1917 than *just* technical or artistic merit.

With so much chatter around the film focusing on that technical achievement, what surprised me was how moving it would turn out to be. It’s just as much an emotional marvel – literally breathtaking, in that I didn’t want to breathe. (The tension means it feels longer than its two hour running time, though you won’t want to leave.)

The thoughtful Schofield (George MacKay), hardened by his experiences at the Somme, is the best man for the job though he’s only going because Blake (Dean-Charles Chapman) chose him before either knew what the task was. MacKay delivers a remarkable performance as the upright, closed-faced soldier, his detachment crumbling in the face of the more rounded Blake’s warm heart and sweet determination.

He has to take charge if they’re to survive: “if we’re not clever about this no one will get to your brother” he tells Blake, who brims over with bravery but lacks the cool judgement the venture requires. (Chapman is an excellent foil to MacKay’s deliberate buttoned-up anger, and it’s telling that only when Schofield is on his own does he let emotion drive him.)

This is a film about two men venturing into the unknown, an official mission that turns into a fast-paced journey of discovery. The other speaking roles are small, and often there to direct the two soldiers on to their next stage (perfect, in fact, for cameos from British thespians: Benedict Cumberbatch, Fleabag “hot priest” Andrew Scott, Richard Madden and Mark Strong all pop up briefly).

It feels as personal as it does political, its boldness coming from the small, often shocking stories along the way. The horrors they witness are many, but they too are often small scale or singular. A dead face sticking out of a mud wall, a burning pilot, a fly-infested horse carcass (apart from the rats. Is there ever a singular rat?)

Only a stretch in the tiny confines of a British Army lorry, giving Schofield a lift as far as they can, widens the picture. The soldiers’ chatter is made up of UK-wide regional accents and their group includes Sepoy Jondalar (Nabhaan Rizwan), a welcome acknowledgement that not all soldiers fighting for Britain between 1914 and 1918 were white or British. (In reality 1.3 million Indian soldiers served in WW1.)

Amidst all that death, life always struggles on. A French woman cares for a baby; a cherry orchard nestles in abandoned green fields, the trees cut down, the stone walls around it now rubble while its doorway still stands. Blake turns out to be something of a cherry expert, one of those details people leave behind when they put on an identikit uniform and march off to war. He speaks beautifully of the white blossom raining down like snow, the different varieties, how they will flower and fruit again even after this. Later Schofield struggles through a river, the white blossom falling silently around him, a beautiful scene made horrific as he clambers over bloated bodies.

In a world where it’s easy to get war film fatigue 1917 feels quite modern. That in itself isn’t so surprising – every retelling of historical events reflects their times, and political leaders seem to continually repeat the mistakes of their predecessors – though creating such a shattering and immersive experience after so many war films is an achievement in itself.

Director Sam Mendes, cinematographer Roger Deakins and editor Lee Smith break down the barrier of 100 years as we see young men about to be sent over the top by officers whose anger long ago seeped out of them, replaced by sheer bafflement at their situation. It seems as if no moment of Blake and Schofield’s experiences that day is missed, and while it is an entirely curated story, it often feels raw.

The “one take” effect of seeing a story unfold in real time makes it feel as if anything could happen. Initially that bobbing and weaving as they jog through crowded trenches, trying to find where they can cross No Man’s Land, is jarring. We are right into the soldiers’ world, where a teenage boy could be smoking a cigarette one minute, and be dead and dinner for a rat the next. It’s not just involving; it’s also disconcerting and disruptive.

Roger Deakins’ cinematography takes us from ordered trenches to sink holes in a deserted muddy battlefield, to green fields and ruined buildings. Most visually extraordinary is a bombing raid on the town of Ecoust during the night. Stone pillars, the only remnant of bombed buildings, loom into the black sky, suddenly illuminated by bright orange and yellow flames and explosions. It looks like an old ruined abbey or cathedral being swallowed by hell.

Writers Mendes and Krysty Wilson-Cairns have based their screenplay on stories told to Mendes by his grandfather, who had to undertake a similar mission in WW1. They steer a course that’s human and unsentimental, though neither is it brutal for the sake of brutality. The pointlessness of war, the months advancing over a few cow fields, remains.

My great-great-grandmother lost two sons with different regiments within three days in August 1915. In a film with limited dialogue, families are ghosts in the background: messages to be passed on to mums, conversations about previous Leave visits home, faded photos of wives and children.

Blake is sent on a dangerous mission to save his brother, to make him try that bit harder, even if it could mean his mother receiving those two telegrams in the same week.