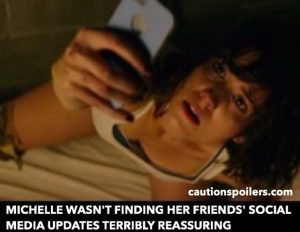 This is a great film that demonstrates that even during an alien invasion you still have to worry about perverts and murderers. But which is worse?

Michelle is urgently packing a bag as she leaves the flat she shares with her fiancé Ben. I’m always impressed with women urgently packing in films – they grab a handful of stuff from their closets and chuck it in a cute vintage case any old how, yet somehow never have that “shit I’ve got five white blouses and one black bra” scenario later. Having said that, Michelle did then spend an age trying to zip up the case which really injected a dose of realism into a film about alien monsters.

Films with a road name and number for a title are always super-scary, and this is no different. I’ve seen so many of them I now get quite freaked out when people tell me their address so I never go to friends’ houses in case they lock me in a basement with no phone signal but with my children.

After being knocked unconscious in a car accident while fleeing her old life, Michelle wakes up in a breeze block room underground, in a bunker built by Howard (John Goodman) under his isolated farmhouse. She’s on a drip and needs crutches because of her injuries. Instantly she’s looking for ways to escape but there’s no phone signal (I actually think that’s worse than an alien invasion) and the heavy door is initially kept shut.

The bunker is big and well-stocked with supplies, and comfortably furnished in a rather old-fashioned British holiday cottage kind of way. Howard seems so proud of what he’s achieved with it that I was waiting for Sarah Beeney from “Property Ladder” to appear and pick apart the finish on the skirting boards and tell him it would have risen in price by that much even if he’d done nothing, but she never did.

Soon Howard – an overweight, lumbering man mountain who seems to want to be like a stern father – allows Michelle more freedom in the bunker. She meets Emmet, a young man from the local area. He’s injured and she thinks he’s been trying to escape. No says Emmet, “I was trying to get in”.

Emmet is funny and lightens the oppressive atmosphere, suggesting a game of Monopoly as if they can’t leave the bunker for a year they might actually get to finish a game. He also lends Michelle a teenage girls’ magazine he’s been reading – “I can do you a French braid now if you want one!”.

There’s a sweet section in the middle where Emmet, Michelle and Howard are getting on well like a little family – eating meals together, playing board games and doing jigsaws. Howard also talks about his daughter Megan who has been taken to another city by her mom.

The three of them are getting on pretty well until there’s a problem with the air filtration unit and Michelle is the only one small enough to climb through the ducts to the equipment room and fix it. Once in there she finds HELP scratched on the inside of a tiny window, and a bloodied earring.

Emmet has up til now believed Howard is a good guy, but when Michelle shows him the photo of Megan and the earring he realises the girl in the picture is actually a missing local girl. Realising they have to escape, they begin fashioning a homemade hazmat suit to wear outside with only a “how to survive doomsday”-type book (a change from the usual holiday cottage reading of a copy of “Lace” by Shirley Conran with the pages stuck together,  a battered “Da Vinci Code” and about 80 Stephen Kings); plus various items from around the bunker (a duck-covered shower curtain, a plastic drinks bottle).

But Howard finds out and it’s no more Mr Not Very Nice Guy as things get a lot, lot worse for Michelle.

And then, poor Michelle, they get even worse than that! It turns out that Howard was right and there has been an alien invasion and it’s out of a metaphorical frying pan and into a literal fire. I won’t tell you the ending but you can stop thinking she just needs to give the aliens a sniffle and they’ll all die and everything will be fine. (Let’s face it, if aliens can build spaceships to travel through time and space when they don’t even have any arms they can probably also invent Lemsip.)

The ending is rather low-key after the psychological horror of the bunker and the physical danger of the aliens though I never felt short-changed. 10 Cloverfield Lane is an odd film but a great one, with a very resourceful heroine and a well-handled mood change from the bunker to the decimated outside world. It should look like two films from different genres spliced together but it’s a testament to the writers, director and the actors that it doesn’t. All the three leads are excellent with John Goodman oozing menace as Howard (and as an editor I can say that if I was ever going to misuse the word “literally”, this would be the time). And I’m now really looking forward to the next loosely related alien horror with Cloverfield in the title.