You are here: Home / Film News / We prayed for Tom Hardy’s Shackleton movie and it seems to have worked…

“Scott for scientific method, Amundsen for speed and efficiency but when disaster strikes and all hope is gone, get down on your knees and pray for Shackleton” (Shackleton’s contemporary Sir Raymond Priestley in a speech to the British Science Association in 1956.) 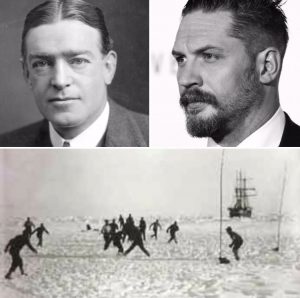 According to Variety, the project originated with Tom Hardy and his producing parter Dean Baker, via their production company Hardy Son & Baker. They’re now teaming up with David Heyman’s Heyday Films to bring Shackleton’s story to the big screen.

I wrote about the film back in 2016, just after I started this website, and I had wondered where it had got to.

Shackleton’s story is one of extraordinary heroism and, well, endurance. In 1914 Shackleton took a crew to Antartica with the aim of crossing the continent from sea to sea via the South Pole (he called it the Imperial Trans-Antarctic Expedition).

En route his ship Endurance got stuck in pack ice, and drifted for nine months before finally being crushed (the picture above famously shows the crew playing football on the pack ice).

He and his 28-man crew decamped into the lifeboats and sailed to the uninhabited Elephant Island. From there Shackleton and a handful of crew members sailed in a lifeboat over 700 miles across treacherous seas to reach the island of South Georgia, which was inhabited.

They then sent a rescue party back to Elephant Island and all the remaining men were rescued. (It’s not entirely true that no one died – three of his men perished establishing depots along their original cross-Antarctica route.)

Shackleton was born in Ireland, and his family moved to London when he was 10. Outside of exploration Shackleton’s life was not nearly so successful, and his many businesses ventures left him heavily in debt.