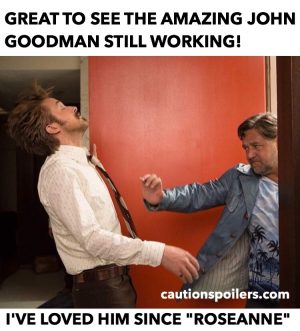 Ha I’m just kidding Russell Crowe! I think you’re fantastic, I’ve seen all your films from “Gladiator” to, er, “Gladiator”. (Though you’ll ALWAYS be Mike from “Neighbours” to me, Russell).

“The Nice Guys” – a movie that wasn’t either from a much-loved Brit comedy show, or part of a superhero franchise, or an animated kids’ film (and that didn’t cost either 8p or £120 million) did really well this summer, probably helped by Russell Crowe’s indefatigable promotion all over Twitter. It does seem to be part of a (welcome) trend for medium budget movies to do well when they aren’t overhyped and are directed at the  right audience (see also: Florence Foster Jenkins, Bad Moms).