Big game are in the film clip too, though they have the upper hand / tentacle / leg, whatever they are. We go back to Day 1, and I felt quite nostalgic for poor old Lee (John Krasinski), who makes an appearance. 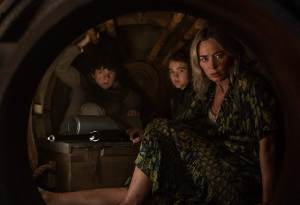 Noah Jupe as Marcus, Millicent Simmonds as Regan, and Emily Blunt as Evelyn

There’s also a behind the scenes featurette, about the unanswered questions we all came out with after the first film. (Like, what happens if you loot a foodstore and there’s only crunchy stuff left?)

And the TV spot:

This is the synopsis:

Following the events at home, the Abbott family now face the terrors of the outside world. Forced to venture into the unknown, they realise the creatures that hunt by sound are not the only threats lurking beyond the sand path.

If you missed the trailer, you can watch it here. The film, written and directed by John Krasinski, is out on 19 March in the UK and 20 March in the US.