Leading independent film distributor NEON has confirmed it’s acquired Ammonite, a love story about a relationship between real-life Victorian fossil hunter Mary Anning and Charlotte Murchison, the wife of a wealthy visitor to England’s south coast, for US and Canadian distribution.

In the film, which was written and directed by Francis Lee (God’s Own Country), Kate Winslet plays Mary, with Saoirse Ronan as Charlotte. Ammonite was filmed in and around the Lyme Regis in Dorset, where Mary Anning lived. 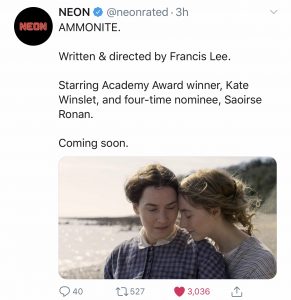 In 1800s England, acclaimed but unrecognised fossil hunter Mary Anning works alone on the rugged Southern coastline. With the days of her famed discoveries behind her, she now searches for common fossils to sell to tourists to support herself and her ailing mother. When a wealthy visitor entrusts Mary with the care of his wife Charlotte, she cannot afford to turn his offer down. Proud and relentlessly passionate about her work, Mary initially clashes with her unwelcome guest, but despite the distance between their social class and personalities, an intense bond begins to develop, compelling the two women to determine the true nature of their relationship.

Deadline have reported that NEON paid $3 million for US and Canadian rights, with Sony Pictures Worldwide Acquisitions already having acquired international territories.