Anne Frank: Parallel Stories is out in select UK cinemas from Monday 27th January, Holocaust Memorial Day (you can book tickets here). The documentary, from writer-directors Sabina Fedeli and Anna Migotto, is dedicated to Anne Frank’s memory and has been created to tell the story of her life, marking what would have been her 90th birthday last year. 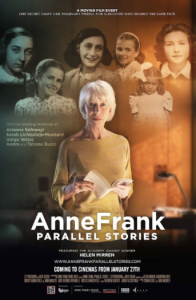 In the film, Helen Mirren retraces Anne Frank’s life through the pages of her diary – and we are introduced to five other women who, as young girls, were also deported to concentration camps, but survived the Holocaust.

Like Anne, Arianna Szörenyi, Sarah Lichtsztejn-Montard, Helga Weiss and sisters Andra and Tatiana Bucci suffered persecution and deportation when they were very young.

These stories of the survivors of the Holocaust put words on the blank pages of Anne’s diary, as it fell silent when everyone in the secret refuge in Amsterdam was arrested on August 4th, 1944.

“This is a story we must never forget. We are beginning to lose the generation of people who are living witness of what happened in Europe in those terrible days, and so it’s all the more important to keep the memory alive looking into the future. With the advent of the wars in Syria, Libya, Iraq, with the immigration issue that’s happening in Europe, it’s so easy to start pointing your finger at different races, different tribes, different cultures, different people and say ‘you’re to blame for my problems’. So, I just feel the diary of Anne Frank is an amazing teaching tool, an amazing vessel to carry the real understanding of human experiences of the past into our present and very much into our future. I find it very, very important and that’s why I wanted to do this piece”.

Mirren’s set is a perfect reconstruction of Anne’s room in her secret refuge in Amsterdam, with every detail carefully recreated by set designers from the Piccolo Theatre in Milan. Off-set, a young girl, Martina Gatti, leads us on a journey that visits the places that were part of Anne Frank’s short life and her feelings.

You can book tickets via https://www.annefrankparallelstories.com/