Based on the novel of the same name by William Lindsay Gresham, in the film, Stanton “Stan” Carlisle (Bradley Cooper), an ambitious young carnival worker with a talent for manipulating people with a few well-chosen words, hooks up with female psychiatrist Lilith Ritter (Cate Blanchett) who is even more dangerous than he is.

The book – published in 1946 – was first adapted for film in 1947, starring Tyrone Power, Joan Blondell and Helen Walker. Regarded as a classic now, it was a financial flop at the time. 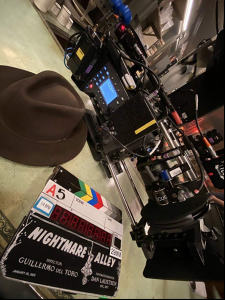 Guillermo del Toro said “I’m inspired and elated to be joined by this brilliant cast. Kim Morgan and I have worked with great passion to bring the dark, raw world and language of William Gresham to the screen and now we are joined by a superb group of artists and technicians to bring it to life.”