You are here: Home / Film News / Final Oscar presenters revealed and one is a surefire hit, man

The Academy has been announcing awards presenters for this year’s Oscars over the last few days, presumably to increase excitement rather than because they’re still asking around to see if anyone’s free.

And I can’t be the only person who saw one name and nearly fainted onto my (red) carpet. James Corden. Oops, I mean Keanu. KEANU! Yes stunt performers may still be the Cinderella of the Academy Awards but John Wick himself will be going to the ball. 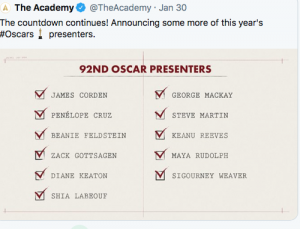 The performers of the Original Song nominees have already been announced. 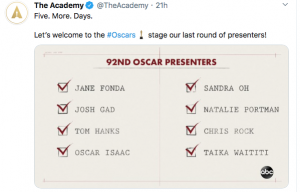 The 92nd Oscars will be held on Sunday 9 February 2020, at the Dolby® Theatre at Hollywood & Highland Center® in Hollywood. 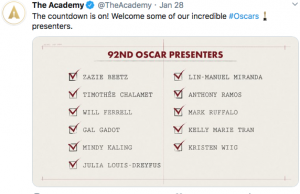 As with last year’s event, there are no individual Oscars hosts. 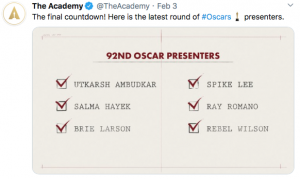 The performers for the Original Song nominees are:

In addition to the five nominated song Oscars musical performances, the show will feature a special appearance by Questlove and a guest-conducted segment by Eímear Noone. Noone is the first woman to conduct during an Oscars telecast.