Following its recent theatrical release, British sci-fi thriller, Invasion Planet Earth will be available on DVD in the UK from 30th December. 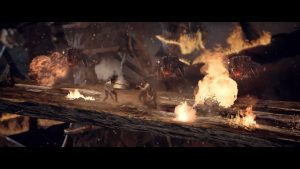 The film, which is already available on digital, has been a 20 year labour of love for writer-director Simon Cox, who ended up crowdfunding some of its budget. Here’s the synopsis:

“The film follows Tom Dunn a broken man after the death of his young daughter. When his wife falls pregnant again, he cannot believe their luck. However, his joy is short lived, as on the very same day, the people of Earth become plagued with terrifying visions of the end of the world.

When a gigantic, all-consuming alien mothership appears in the sky and launches a ruthless attack on Earth’s cities, chaos and destruction follow!

Tom must find the strength and wisdom to save his wife and unborn child. However, first he must confront a shocking truth. A truth which threatens the key to the survival of the human race.

The ultimate war for Planet Earth is about to begin…” 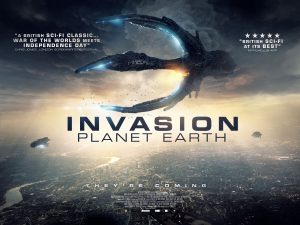 The DVD  includes the following extras:

I reviewed the film recently and while its budget often shows, you can’t fault Cox’s ambition – check out my 2/5 review here. You can also enter my competition to win a DVD of the film (UK only).

rent / buy the film on digital from amazon uk