They’re facing the music this August (21st to be exact) and today a new image was released for the movie. 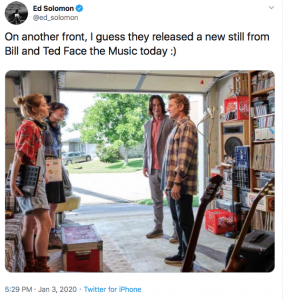 The image features Ted (Keanu Reeves) and Bill (Alex Winter), along with their daughters Billie Logan (Brigette Lundy-Paine) and Thea Preston (Samara Weaving) in a garage and… well you can see it yourself, can’t you.

William Sadler is back as Death and Amy Stoch as Bill’s stepmom, so if it ends up being a 3-star movie I’m bagsying the “hit and Missy” gag right now.

While I am very excited about the film, I am still mourning Keanu’s beard.