You are here: Home / Film Articles / The John Wick 3 countdown has begun… do I get an hour’s headstart? NEW promos 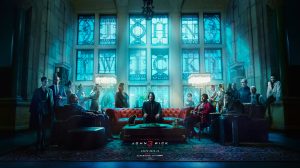 Does your window have your name in it? A Darren And Sharon sticker across your windscreen doesn’t count

“I ‘ad that John Wick in the back of my cab the other week, lovely fella!”

Check out the NEW clip of John Wick in a cab on a rainy New York night, below. It’s far from dark though – that riotous colour is stunning.

There’s also a NEW picture of John Wick sitting in the lobby in The Continental, which I love even though it looks like Professor Snape sitting in front of a very unsatisfactory salad he’s just been served for tea at Hogwarts.

I have total FOMO watching people chilling out at The Continental despite them being brutal killers the rest of the time. Watch the NEW Continental featurette below, about the world-building around the world’s most glamorous and secretive hotel chain.

It’s only four weeks to go until John Wick: Parabellum is released. We know this is the last in the franchise and yes I’m terrified they’ll kill him off. Whatever the outcome, I’m still going for a sequel with the daughter of John and Miss Perkins (come on, of course they’ve been been at it at some point) reappearing in 20 years’ time to avenge her mother’s death even though her mom once tried to kill her dad for cash.

Here’s the synopsis for the new film:

“Super-assassin John Wick (Keanu Reeves) returns with a $14 million price tag on his head and an army of bounty-hunting killers on his trail. After killing a member of the shadowy international assassin’s guild, the High Table, John Wick is excommunicado, but the world’s most ruthless hit men and women await his every turn.”

Oh yes and as John says, “it wasn’t just a puppy”.

John Wick: Parabellum is directed by Chad Stahelski and is released in the UK and US on 17 May 2019. Check out the second trailer and character posters here, and the first trailer and images.
Back to top