You are here: Home / Awards / After The Baftas 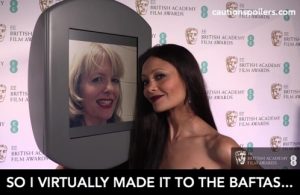 The Baftas – or to give them their official title, the EE British Academy Film Awards, were held last night in London’s Royal Albert Hall with the Duke and Duchess of Cambridge, otherwise known as Princess Kate and her husband, in attendance.

And yes I was there! Well my selfie was, thanks to a Twitter competition held by sponsors EE. See me on the left with my new BAF (Best Android Friend) the gorgeous Thandie Newton.

Anyway back to the awards. There was no total landslide though La La Land won five. But stars of four different films were honoured in the four actress/actor categories.

Awards ceremonies don’t like using “best” any more but I know pretty much everyone does in their heads, so feel free to mentally add in a giant BEST!!!!!!  to the beginning of each category title below.

Check out the main category winners and visit bafta.org for the full list of awards winners. 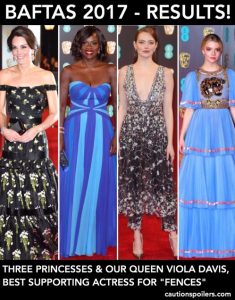 Leading Actress – Emma Stone for La La Land. Yes she was great in La La Land and I came out wanting to be her, and to be able to do cartwheels and stuff, but Amy Adams gave a better performance in Arrival. (Her outfit last night though… 10/10).

Leading Actor – Casey Affleck for Manchester By The Sea. I still haven’t seen this and every time I hear the title I imagine a 20-year anniversary documentary about a Britpop gig held on a litter strewn beach somewhere.

Supporting Actress – Viola Davis for Fences, the Denzel Washington-directed drama based on August Wilson’s play. If she doesn’t win the Oscar I’ll eat my hat (a hat made of toast though – much as she deserves the win, and all her awards successes this season point to it, me suggesting anything seems to be the kiss of death for it, and I don’t want to actually have to eat a hat. I do love toast though).

Supporting Actor – Dev Patel for Lion. A few people have said he should have been up for Best Actor but I felt that Sunny Pawer, who played young Saroo Brierly, had the bigger role in Lion and basically helmed the more important part of the film. Though it does make you question what counts as supporting vs main and what you do with a genuinely ensemble cast (next time this actually happens I will watch closely the expressions of the non-nominated ensemble cast members as their co-star wins Best Actor). Anyway back to Lion! I really did want Sunny Pawer to be recognised for his extraordinary performance, while at the same time hoping he wouldn’t be, as it must be incredibly hard for a child to cope with living up to awards won early in their career and life.

Film – La La Land. It is a lovely film (and the first scenes kind of blow you out of your seat with their sheer exuberance) but it’s derivative, and I felt the ending implied she had refused to give up her dream for him. Woman are expected to do this a lot. For me it was a fabulous 4.5 star movie not a fantastically fabulous 5 star movie.

Director – Damien Chazelle, for La La Land. OMG he is SO YOUNG and he has achieved so much. I am very much in awe and now very depressed. 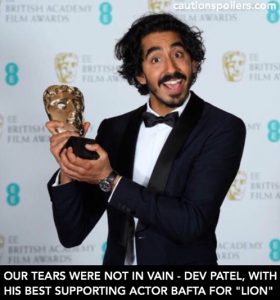 Outstanding British Film – I, Daniel Blake. Many films are called “searing indictments” but few really deserve it. Ken Loach’s Palme d’Or winner does. Set in the city of my birth, Newcastle upon Tyne in previously-industrial north east England, it highlights the friendship between 59 year old unemployed joiner Daniel, who is recovering from a heart attack, and single mother of two Katie, as they try to survive within a welfare system that punishes them at every turn.

Bafta Fellowship – Mel Brooks. Well deserved and if this isn’t the perfect excuse to rewatch Blazing Saddles I don’t know what is.