You are here: Home / Trailers / The con is on, again! The Hustle trailers plus film clips 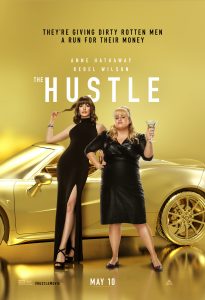 In this reworking of the 1988 comedy Dirty Rotten Scoundrels, two scam artists, one posh and one from the wrong side of the tracks, team up to do their worst.

The 1988 film starred Michael Caine and Steve Martin. This update has Anne Hathaway training up Rebel Wilson’s endearing but rather low-rent scammer, who so far is using her fake sad tales to scam extra slices of cake rather than diamonds or simple big bucks.

And according to her new mentor, great hustling is all about making men think we’re endearingly stupid.

The trailer also looks endearingly stupid, so hopefully the film itself will also be endearingly stupid rather than just stupid. Though I did like the boob joke and Rebel’s “trashy dressing”, when she’s saved by her black bin liner dress.

I can’t find any character names yet (I think Rebel may be called Jenny but my hearing is ropy and movies are so mumbly now I can’t be sure).

Anne Hathaway has an English accent in this, though it’s really odd I wonder if it’s a double bluff in terms of where her character is supposed to be from.

The Hustle is directed by Chris Addison and it’s his first feature. It’s out in the UK and US on 10 May.