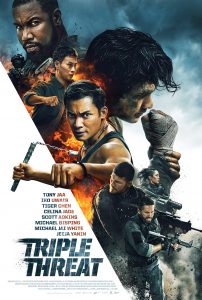 “Come and ‘ave a go if you think you’re ‘ard enough!” deadpans the relentlessly merciless Collins (Scott Adkins), during Triple Threat. It’s a good example of how director Jesse V Johnson utilises the different backgrounds of his characters and actors while still keeping the film on a straight path as a martial arts movie.

This has been billed as “the biggest, baddest, killingest action event of the year”. And while it’s only March – and I’m not exactly an expert on the genre (Oldboy and John Wick are the limits of my experience unless you include the arm-flapping contretemps between Hugh Grant and Colin Firth as they fought over the charms of Bridget Jones) – it does a good job of living up to that title.

Johnson has certainly got himself a cast to die for, which is a good thing as so many people do.

He’s crafted a grimly amusing, riotously exuberant thriller – and, I can attest, you don’t have to be a super-knowledgable martial arts fan to enjoy it. But let’s face it, this is an action movie, filled with a bunch of hugely talented action stars. Johnson, and his action choreographer Tim Man, certainly deliver on that score. The set pieces, including the shoot-outs, are stunning and sometimes beautiful.

The hand to hand combat is often eye-popping. Sometimes it’s frenzied and furious, sometimes measured, contained and driven by cold rage. I wouldn’t call it a ballet but there’s often an elegance to both the performers’ moves and their stillness.

It contrasts with the visceral results of such violence, elegant though it may look as someone runs backwards up a wall before coming straight back with a punch. Being killed is noisy and gunky: necks crunch, bone splinters, blood spurts out of bullet exit wounds, bodies crash against windscreens, knives are forcibly squelched into torsos.

The storyline is straightforward, often pausing to showcase the action. Long Fei (Tiger Chen) and the quiet Payu (Tony Jaa) are local guides, paid to take a group of mercenaries to a camp deep in the jungle. They’re told it’s a humanitarian mission, to free the many prisoners being held there, but actually the mercenaries are only after Collins, and have no qualms about the number of innocent people killed in their onslaught of bullets, or left behind to die in a blast.

One of those killed is the wife of Jaka (Iko Uwais), and it’s over her body that he swears vengeance against the people responsible. It’s a vow that leads him on a journey through the city as he takes on the brutal gang; and despite it sometimes being a breakneck ride Jaka is always one step ahead.

In the city he tracks Long Fei down to an illegal gambling den, and in a superbly brutal set piece fights him in the ring (you can see a clip below). Afterwards they forge an understanding of sorts, though for a while it’s unclear whose side he’s really on. Tiger Chen works that ambiguity, with Jaka dancing around everyone as he sets them on pathways that will take them to where he needs them to end up. It’s an audacious performance, convincing both sides that he’s with them while working against his sworn enemies.

Collins and his crew of mercenaries have been brought in to take out billionaire businesswoman and heiress Xian (Celina Jade). Her decision to use her vast fortune to stamp out a local crime syndicate, which has been draining the lifeblood out of the city, has left her a marked woman. (She may be marked but her white trouser suit must be literally cut from the same cloth as Claire’s white skirt and jacket in Jurassic World, so clean does it remain throughout all of this.)

“Soldiers of fortune” Collins and his crew like to call themselves, which sounds a lot more glamorous than mercenaries. They’re mostly big and brawny (the unsentimental Mook, played by Jeeja Yanin, may be low on brawn but she’s high on unrelenting determination).

A massive gunfight in broad daylight leaves Xian running for her life, culminating in a blistering battle in the local police station as Collins and his team shoot their way in, and Long Fei and Payu try to escape with Xian. (I did like Long Fei’s nothing-if-not-honest response to Xian asking if he can get her out as the police station is overrun with gun-wielding killers. “I don’t know”.)

The two teams – Collins and his crew, Long Fei and Payu – chase through the city, Jaka weaving between them, always with the end in mind.

Triple Threat is billed as an ensemble thriller, and while some characterisation is deft, there were certainly people I’d have appreciated more of – particularly Mook. She gives no ground, but we don’t get much of her. More depth, and more screen time, would have made her an interesting counterpoint to the very poised and elegant Xian, especially as both women are grimly determined, and prepared to take risks for what they want.

Devereux (Michael Jai White) is the most interesting of the team, a soldier-for-hire who seems to have survived so far thanks to a mixture of instinct, insight and experience. As brutal as Collins, nevertheless his thoughtfulness makes him a useful foil for the other man, and he doesn’t have that overweening confidence that can cause a group’s destruction. He’s the first to suspect Jaka, though it’s suspicion tempered with respect.

Scott Adkins is scarily believable as Collins. Utterly vicious, with no conscience, his hubris constantly risks being his undoing. He mocks his opponents – partly to needle and goad, but partly because he underestimates their fighting skills.

The film is clunky at times, as exposition is delivered via slightly stilted newsreaders. And the plot is basic (though there definitely is one). But the balance between martial arts, shoot-outs, chases and the (admittedly short) quieter sections in between, where everyone catches their breath, is well done and I couldn’t fault the pacing.

Johnson really makes the most of his locations too, from the sweaty jungle camp to the large, airy municipal buildings to little narrow corridors lit by glaring neon at night.

Colour is used very effectively, and several scenes are genuinely beautiful. As Jaka weeps over his dead wife, digging her grave after the sun has gone down, the sky is dark petrol blue, the fires around him glowing orange and reflecting off his skin.

Later there’s a huge fight in a magnificent and elegantly faded polo club, long fallen into disrepair. Ornate chairs and crumbling statues sit forlornly in empty rooms, swathed in blues and greys distilled from the night sky and the shadows. Elsewhere in the crumbling building, the cavernous hall and wide staircase are glowingly lit by orange fires – a genteelly-faded hellscape.

Check out the trailer below, then scroll down for some cast pictures and stills from the film