You are here: Home / Film Reviews / The Man Who Killed Don Quixote 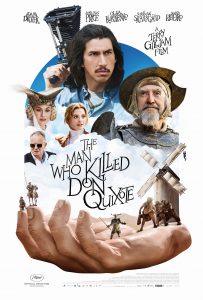 “This is a marvellous day for adventures!” says film director Toby as Gilliam’s highly enjoyable film meanders to a close, by which point Toby has finally found a rarely-reached freedom.

A hot, sweaty buddy movie, both dreamy and nightmarish, little is as it seems in The Man Who Killed Don Quixote.

Gilliam’s film is based on Miguel de Cervantes’ 17th century novel, in which a chivalry-obsessed Spanish nobleman came to believe he was Don Quixote, a knight-errant, and that a local farmer called Sancho Panza was his squire.

This is a sprawling, sometimes messy, slightly overlong epic. It’s witty, weird, clever and confident. I was breathless at times, a little bored at others. It’s also been a long time coming, with director and co-writer Gilliam taking decades to bring it to the big screen.

The film is dedicated to Jean Rochefort and John Hurt – both actors were to play Quixote in earlier iterations of the movie, attempts that for various reasons failed to reach fruition. This version stars Jonathan Pryce as Javier the shoemaker as Don Quixote, and Adam Driver as Toby the director as Sancho Panza.

Javier, an elderly shoemaker from a small Spanish village, played Don Quixote in Toby’s student film a decade earlier, and now believes himself to be Quixote. He also believes Toby – who 10 years on has returned to the village while filming nearby – to be his squire, Sancho Panza.

Toby is self-centred, wealthy and successful, always happy to blame someone else for his actions if they might get him into trouble. His lack of concern for others isn’t a result of his success and indeed has probably helped build it.

He’s now back in the area making a disastrous, bloated commercial based on the same ideas as his original film, and revisits the village which had provided some of his untrained actors: Javier the shoemaker, and Angelica (Joana Ribeiro) the then-15 year old daughter of local bar owner Raul.

Completely unaware of the impact he and his movie made on their lives, it’s a shock to see what happened to his actors after he filled them with ideas and dreams and then walked away.

Anjelica has left for the city, after he told her he could be a Hollywood star. Javier is living in a smallholding where he performs for tourists. Dressed in his old armour, a tin helmet on his head, he’s convinced he’s Quixote.

He’s also convinced that Toby is Sancho Panza, and after an incident involving a large fire, a gun and some policemen, both men end up on the run together (quite possibly in small circles – mileage is not the kind of distance this film deals with). It’s an adventure where it’s never clear what is true and what is false, with Toby’s own realities constantly changing.

And while it feels dreamlike it’s not so much that reality, timelines and dreams are merging – often it’s more that they seem to layer and overlap. (Imagine that childhood experiment where different coloured earth and sand are layered in a jar and worms burrow through, linking them in specific spots.)

Time weaves in and out, and what could be ancient turns out to be present day. It’s Holy Week so every village is having its parades, whether now or the past. A glamorous costume party in a castle could be set hundreds of years ago, but isn’t – even so, the more violent historical version is soon bleeding into the modern, safety-conscious one.

Toby starts off looking the way rich men do in hot environments, with pristine white trousers, pastel shirts and a white hat. Soon he’s grubby, in a poncho, clothes ripped, riding on a donkey. It’s quite a journey, one which he needs but which Javier seems to enjoy the most.

Javier had nothing and has become a legend, even if only in his own mind. What could be better for an elderly man living in anonymity than believing yourself to be a knight-errant, looking to rescue a damsel in distress?

Pryce is a creaky, swashbuckling joy, and very moving when he finally spots people’s mocking. His grasp of English is impressive, deliberately so. Much is self-referential. At one point Toby pushes the film’s on-screen subtitles off Raul’s bar. “Who the fuck wrote this ending!” he later screams, caught in a storm. At that extravagant party, Toby’s boss (Stellar Skarsgård) admonishes Toby to “try to keep up with the plot” as an old-style tableaux is performed.

Traipsing across arid, scrubby countryside, Toby and Javier end up at compound where Muslim illegal immigrants from Morocco are hiding, though in Toby’s dreams they’re living hundred of years earlier and the Inquisition is on its way. Later they somehow find Anjelica, older and wiser and with a rich but thuggish boyfriend, vodka kingpin Alexei, the host of that party.

The party, near the end of the film, is a gorgeous high: confusing but also vibrant, noisy and extravagant. I do love a bit of pageantry whichever century we’re in: the celebratory chaos, colour and masques.

Eventually losing all the trappings of success, Toby has to accept responsibility for his past actions, and face up to his Quixote-like traits himself: attraction to the surface glamour and romance of rescue, promising dreams he can’t fulfil, when his actions may simply make things worse.

The film is often hilarious, with Driver deadpanning his way through lines, rolling his tongue around simple words in a way that only he can. Toby never loses his understanding of both the dreamlike and nightmarish sides to his job, even as he’s enjoying the benefits of his minions scuttling round after him and declaring him a genius.

Its dreamlike quality – those infuriating dreams where you’re trying to get somewhere but are constantly held back or sent on diversions – is remarkably similar to Gilliam’s journey with the film itself. Art imitating life imitating art (ad infinitum).

As someone who likes to get a move on, I often found The Man Who Killed Don Quixote maddeningly frustrating, though it certainly made me feel for Gilliam, and his journey to actually complete his film.

Watch the trailer for The Man Who Killed Don Quixote: