You are here: Home / Film Reviews / The Lego Movie 2: The Second Part 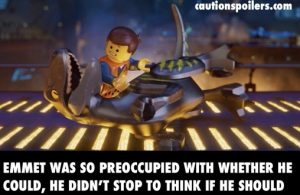 Younger sisters can be awful, and I should know as I am one. Or maybe I’m just misunderstood.

Bianca (Brooklynn Prince), the younger sister and architect of everything no longer being awesome in Bricksburg, is misunderstood, and the whole second Lego movie could have been avoided if only her older brother Finn (Jadon Sand) had included Bianca, her Duplo and her Lego Friends in his games in their Lego-filled basement.

But then we would have missed out on the brilliantly named Queen Watevra Wa’Nabi (Tiffany Haddish), a regal and transformative collection of bricks who most definitely isn’t evil, and we know that because she has a whole song about how she’s not bad at all even if people think she is.

Or the harder, stubblier, and frankly hotter version of Emmet, who’s come from the future. He’s also voiced by Chris Pratt, and channels all that fine actor’s experience: “The name’s Rex Dangervest. Galaxy-defending archaeologist, cowboy, and raptor trainer!”

Yes this is a film about learning to get along and play together, rather than in different rooms or separately but side by side. It’s also about how easy it is to miscommunicate or be misunderstood, with disaster ensuing. All of these are lessons we could learn from in the home, at G8 summits, and on Twitter.

Lego Movie 2: The Second Part starts five years ago, with an invasion of brightly coloured Duplo aliens. Bricksburg’s inhabitants try to appease the invaders with a Lego heart but they keep coming back, attracted by anything colourful and cheery.

Eventually they feel they have to rebuild their city as Apocalypseburg, in the hope that the invaders will be put off by the gloom and general misery.

Half a decade on, and Lucy/WyldStyle (Elizabeth Banks) certainly seems to be enjoying life in their tougher, grittier home. Surrounded by a dystopian desert wasteland, which she surveys with a giant scarf wrapped over her nose and mouth, Apocalypseburg has been constructed to repel alien invaders.

Now the only cheery thing left in the city is Emmet, who try as he might just can’t help thinking everything is still awesome despite oodles of evidence to the contrary.

But then the invaders return, led by General Mayhem (“she’s from Lego Friends!” whispered my 7 year old to me helpfully), kidnapping a group of residents including Lucy and Batman, under the guise of a wedding – as it turns out Queen Watevra Wa’Nabi wants to get married.

It’s then up to Emmet to try to save Lucy and the others, even though no one really thinks he’s up to it, while Lucy works from the inside to resist the sparkly, glittery overtures they’re subjected to on the ominously named Planet Sparkles, in the Sis-Tar system.

But as she’s being slowly attacked with a succession of massages and glitter facials, Emmet’s rescue mission gets a boost when he teams up with Reg Dangervest; a strong and not at all silent type who seems keen to help.

The screenplay was written by Phil Lord and Christopher Miller, who directed the first film (this sequel was helmed by Mike Mitchell). The film is a meteor storm of knowing jokes and meta humour, and with Batman still enunciating his brooding self-reflection.

The gags come incredibly fast and I’ll admit it was a blessed relief not to have to listen to any Brexit allegories played out by Theresa May and Jeremy Corbyn mini figures.

Song-wise, Queen Watevra Wa’Nabi’s big number takes a while to get into. Much more catchy is Catchy Song, with the lyric “this song’s gonna get stuck inside your head”, and, well, don’t say you weren’t warned.

There are some fabulous new characters. Despite Haddish’s charms (she could make the skeleton of a long-dead Victorian patriarch sound entertaining and upbeat) Planet Sparkles’ monarch never really hit the spot for me – but I particularly loved Noel Fielding’s “attractive and non-threatening teen vampire” Balthazar. The cameos are hilarious, including Bruce (Willis not Wayne), and Ruth Bader Ginsberg.

The battle between glitter and gloom, with glitter so often having the upper hand, will appeal to many girls who find their pastel-hued choices reviled in real life. Why can’t Batman dress in white and wear a lovely, snuggly, cream fur cloak? (Also mums, we get topless Batman so don’t miss that).

It does have several returns from the Lego World to “real life” to see what Bianca and Finn are up to, and they’re both unnecessary and distracting. We only need the one at the beginning and the one at the end. After the incredible animation of the actual Lego story, they look a bit TV movie. And it goes slightly awry towards the end when we get bogged down in time travel and what feels like a Reg Dangervest: Origins story.

The animation is once again terrific (it’s easy to get blasé isn’t it), and the twists and turns are nippy, if not always easy for younger children to follow – and the moral of the story one that all parents will be eternally grateful for if the film can pull it off. Just think of the peace and quiet we’ll get! And out feet will thank us for it, with no more agony-inducing little people lying around on the floor after trying to get through “the Stairgate”.

Like my children’s playroom, it sometimes seems messy and unfocussed. Then again isn’t that how we’re always telling our children we want them to be? It was from Bianca’s imagination that Planet Sparkles, a Batman marriage, glitter vomit and the world’s most unthreatening vampire emerged.

The ending, about how really the inhabitants of Planet Sparkles just wanted to be friends with the residents of Bricksburg all along, sums up how sibling relationships often work. And I particularly liked that Queen Watevra Wa’Nabi turned out to have been literally formed from that big Lego heart given to the Duplo invaders as that very first peace offering. The little sister is vindicated at the end.

Watch the Lego Movie 2 trailers and check out the character posters, below.