You are here: Home / Film Reviews / Curse Of Buckout Road 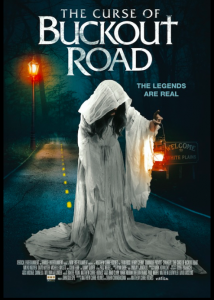 America’s long roads seem to have more spooks than GCHQ, every journey down them offering a potential encounter with a ghoul, zombie, werewolf or reanimated, stinky pet cat.

Buckout Road, in Westchester County in New York State, is the latest to make you wish you’d stayed at home with a good horror film (perhaps this one?).

This is a movie about urban legends. It’s uneven, but it’s often great fun and also quite clever, with its student protagonists not just looking at the mix of terrifying true stories and later embellishments that seed them, but also breaking them apart to the evil behind that stalks unbelievers (if you believe in that sort of thing…)

Hysteria or haunting? Urban myths or monsters? In this case the devil really is in the detail. There’s clearly a link with modern times, and as the students start to investigate, past events in their lives become key to the story.

Teacher Stephanie Hancock (Mayko Nguyen) tasks her class with looking into local urban legends and the stories behind them for a project titled The creation and destruction of modern myth. Most of her students aren’t interested, now that god is pretty much dead, but before they can really get started the small town has its its own modern mystery, when Stephanie – plagued by terrifying dreams – sleepwalks from her home in her white nightdress and hangs herself from a tree on Buckout Road.

He does send her back to her previous psychiatrist though, Dr Laurence Powell (Danny Glover), who was a pastor until his daughter died and he lost his faith. Since then he’s been the arms-length guardian of his grandson Aaron (Evan Ross), who after boarding school and Naval post-graduate college is now back home, still confused and angry over his grandfather’s treatment of him.

Soon Cleo, Aaron and Cleo’s friends, twins Erik (Kyle Mac) and Derek (Jim Watson) are having nightmares, that seem to closely follow three well-known legends of Buckout Road (it is a real road and it is claimed to be the most haunted road in America; the three legends referenced in this movie are genuine).

Derik are great fun though, weed-loving brothers clearly known for being daft slackers. It does feel like a town where exasperated adults look after its youth, apart from the death stalking the streets bit.

Much of the humour comes from Derik, whether their movie nightmare, bribing a straight-laced librarian with weed, or sleepwalking into the forest one night, wearing matching pyjamas.

They maintain their disbelief longest, even as they know weird stuff is happening to them: “you think we hurt Evil’s feelings?” laughs Derik, and he’s probably right.

The gruesome deaths mount, even as the four students discover that the stories they know about Buckout Road aren’t even accurate. I liked their debunking of the idea that witches were always burned at the stake, when most people executed for witchcraft, and all in the US, were actually hanged. Not that such modern revisionism helps Cleo, Aaron, and Derik.

The Curse Of Buckout Road is knowing, while avoiding that increasingly tired ironic examination of why we fear. Occasionally the tonal changes don’t come off (the very last scene is funny but doesn’t really flow from the one immediately preceding it) though most of the time the humour really works.

Local characters are intriguing rather than over-the-top creepy: Colm Feore, who plays the pastor at Laurence’s old church, is ambiguous and hence unnerving whenever he appears.

Particularly effective is the woman in white, the wife of a slave owner who beat her for her affair with a slave and who now patrols the road pulling people to their doom. She’s terrifying as she scuttles backwards through the dark woods, and even her goose-like honking is frightening (geese are quite dangerous though). Then there are the three witches, burned at the stake hundreds of years ago in a clearing off Buckout Road.

Jump scares, even of the creaking door variety, are still chilling to begin with, though they become less effective. Tension sometimes dissipates: the historical flashbacks/dreams often feel lacklustre, particularly the legend of the burning witches. Derik’s cannibal dream works so well precisely because director Matthew Currie Holmes tries something different, leaning into overused slasher movie tropes and the physical degradation of old film. The witch burning doesn’t do enough with supernatural forces, and the third legend – about an attack by John Rawlston on his pregnant wife, replete with racial slurs about her lover – is just unpleasant.

It does feel messy at times, with too many ideas (or maybe the ones there simply aren’t delineated properly). The last act looks cheaper than the rest of the movie, and the denouement is basically someone telling a survivor exactly what happened and why.

This is a sometimes-raggedy horror thriller, but if you can get past the clunky elements (most of which are probably budget-related) there’s a lot of fun to be had in The Curse Of Buckout Road: the understated performances of Glover and Feore; Derik’s good-humoured slacker comedy interludes; and the delicious thrill of urban legends we can deconstruct before finding what lies beneath.

Rent or buy on vod from amazon uk

rent or buy on vod from amazon.com