You are here: Home / Film Reviews / The Angry Birds Movie 2 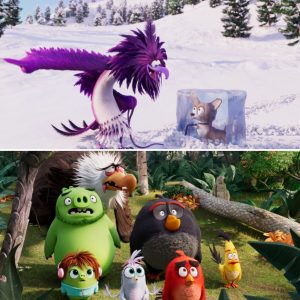 It was with a degree of trepidation that this sometimes angry bird plus 2 fledglings sat down to watch Angry Birds Movie 2.

Funny and frenetic, with a message even easier to digest than my edible hat, it’s also (oh joy!) only an hour and a half long. (Technically the whole film is an hour and 36 minutes but I had to take my youngest out to the loo half way through, one of the perils of being a film reviewer and a mum.)

It doesn’t matter if you haven’t seen the first film – the introductory scenes provide a good overview of how the characters got to where they are now, including Red’s lonely childhood, something it achieves without falling into clunkily shoehorned exposition.

The bird and pigs are now in the middle of a prank war, waged from their respective homes: Bird Island and Piggy Island. Red (Jason Sudeikis), with eyebrows worthy of an early adopter YouTube make-up guru, grew up lonely; saving Bird Island in the past has given him hero status, and everyone wants to be his friend. He’s terrified of losing that status though, and his journey to being able to share the limelight and accept help from those more skilled than he is sweetly done.

But he’s about to acquire a new nemesis: evil eagle Zeta (Leslie Jones), a purple-feathered single mother who lives on an island even colder than my spectacularly aggressive fridge (punishment for me turning it down by half a point: rock hard lettuce and permafrost cream cheese).

Zeta lives in her frozen lair with only her mini-me daughter Debbie (Tiffany Haddish), a pet dog frozen into an ice cube, and various avian bodyguards for company. She’s desperate for warmth (wait, is that a metaphor?), and figures that once she’s killed the birds and pigs with her massive ice ball bombs, she’ll soon be sunning herself on their sandy island shores.

Instead a rather ramshackle collection of avian and porcine would-be heroes, plus engineering genius and Chuck’s sister Silver (Rachel Bloom), come together to sneak onto Zeta’s island and destroy her superweapon.

Quite a lot happens before they set off; Red even attempts speed dating, where he’s told by a date that he has “resting bird face eyebrows”.

Their adventures on Zeta’s island are great fun, though I have to agree with my children that the screenwriters’ greatest moment is not Red’s journey, or Zeta’s redemption, or even the fledgling relationship between the frozen dog and a seal; but when the attack team hide in a giant blue bird costume, end up in Zeta’s employee toilets and have to pretend it’s having a wee.

There’s a minor but very funny subplot involving the three pastel coloured hatchlings, guarding their always-disappearing sibling eggs. At one point the eggs end up catapulted onto a cloud, and an idea to inflate one of the hatchlings to use as a rescue balloon works rather too well as all three drift up into the sky, through the atmosphere and eventually out into deep space itself, right up to a rusty satellite – all to the sound of Space Odyssey by David Bowie. Actually one of the film’s unexpected delights is its use of music, with well-known songs popping up to accompany the right action sequence at exactly the right time.

Another delight is how long some of the ideas are extended, while remaining funny until the end: that accidental trip into space, Red’s speed dating evening, the toilet scene, and even the final attack on Zeta’s lair, which includes an old but always-funny joke about accidentally unplugging the microwave instead of the superweapon.

Poor Zeta turns out to be, if not simply mean, then maybe misunderstood and mean. I’ll always back up women characters in film, and this is a women-centric movie. All are clever and brave (yes even Zeta. Look I didn’t say they weren’t evil), while the men have lessons to learn. I particularly liked Garry the gadget maker (Sterling K Brown), a pig whose inventions are never entirely thought through; and Mighty Eagle (Peter Dinklage), who once jilted Zeta at the altar, and may have left her with more than bad memories.

The voice cast is excellent, particularly the terrific Leslie Jones as the exuberantly misguided and quite possibly sociopathic Zeta, Tiffany Haddish as her daughter Debbie and Peter Dinklage as her… um as Mighty Eagle.

This is one of those genuinely family-oriented movies that is neither too simple for parents and carers to enjoy, nor so knowing and irony-filled that you end up wondering if it’s forgotten its core audience. Its messages – about working together across borders, and understanding why some people might make the destructive decisions they do – are welcome.

The set-ups never seem forced, the jokes are funny, the characters are massively engaging and the long pay-offs consistently work.

Watch the trailer for The Angry Birds Movie 2 (scroll down for images):