You are here: Home / Film Reviews / The Addams Family 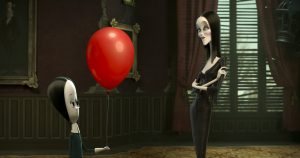 It’s the job of the younger generation to drag us out of our comfort zones, or in the case of the Addams family, discomfort zones.

So it’s left to the literally dreadful Wednesday (a gloriously deadpan Chloë Grace Moretz) to take the lead in demonstrating to her family that expecting conformity, even if it’s conformity to a specific kind of weirdness, is no longer acceptable.

And she steals the show while she’s doing it, animating dead frogs in dissection class and defeating the school bully.

In a neat (very neat) twist, Wednesday’s new friend Parker (Elsie Fisher), dressed by her mother Margaux (Allison Janney) in tennis dresses with pink bows, finds her inner goth, dying her hair black and shaving the sides off. Meanwhile Wednesday is experimenting with unicorn hair clips and those pink and white dresses.

Meanwhile Pugsley (Finn Wolfhard) is meant to be preparing for his Mazurka, a rites-of-passage ceremony involving sword fights and an extended family reunion that is heavy on tradition and ignores the boy’s impressive skills with more modern weaponry.

The Addams family are now settled in their forever home, choosing the location after looking for, as Gomez (Oscar Isaac) puts it, “somewhere horrible, somewhere corrupt, somewhere no one would be caught dead in” – yes, it’s New Jersey.

The decaying, cobwebby ex-asylum is a refuge after being chased away from their own wedding by threatening locals, and thanks to the mists rising from the marshlands below their spooky mountain-top eerie, no one in the town of Assimilation below knows of their existence.

But home makeover queen Margaux (imagine Laurence Llewellyn-Bowen crossed with Sarah Beeney but with all their morals sucked out by the latest Dyson) has redesigned the whole of Assimilation in lurid tones of pink, blue and green, and needs to sell all the homes to avoid going broke. And with the scary house on the hill spoiling potential new residents’ views, Margaux is spoiling for a fight.

The first incursion of pastel cheer into the Addams’ perfectly gloomy idyll is when they are accidentally love-bombed by Margaux’s pink and blue candyfloss confetti, which starts raining down on them after the launch of her new TV show; soon she’s demanding to be allowed to make over their mansion so it fits in with her preferred colour palette. 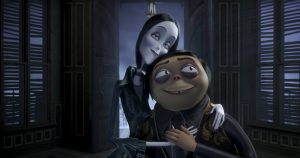 The Addams Family is all about accepting difference yet knowing when to compromise for friendship, however that difference presents itself. In Wednesday’s family it’s the person with the rainbow-hued hair accessory who is under pressure to conform.

As always with animated children’s films, the joy for adults and older children is often in the background details: Morticia (Charlize Theron) using her parents’ ashes as face powder and eye shadow on the day of her nuptials (one way to make sure your dead mum and dad are with you on your wedding day), Lurch reverse-hoovering dust all over the bannisters, the family’s very own bottomless pit in the cellar, and a particularly good joke about scuttling hand Thing googling foot fetish sites on a laptop.

Children with siblings will adore the loving, yet murderous rivalry between Pugsley and Wednesday. Who hasn’t tried to bury their little brother? My 10 year old declared the film worthy of four stars (he hasn’t seen the wonderful 1990s live action movies though, a terrible mothering lapse on my part), and particularly loved Uncle Fester’s literal response to Margaux’s metaphor about making people’s heads spin.

The highlighting of the day-to-day fear Morticia feels for her children in the face of the repeated persecution the family has suffered is well done, and there are also several rather good musical interludes from Lurch on the piano and organ, culminating in a brilliantly mournful cover of Everybody Hurts that’s both moving and funny.

Yet overall The Addams Family feels quite flat, its quirks and eccentricities squashed out of it, that incredible cast often wasted; I was left wandering what joys we could have witnessed if Theron, Isaac, Janney and the others had been part of a live action remake or reboot. The animation isn’t particularly inspired and most of the jokes raise amused smiles rather than guffaws, such as the half-hearted nod to It’s red balloon (don’t confuse It with the hirsute Cousin Itt, who also appears, or rather doesn’t).

Morticia is strangely subdued, her quips – based on the inversion of typical family norms – now as musty as their home.

This is Wednesday’s film though, and it perks up considerably as she deadpans her way around both the family home and the local junior high, fighting conformity on both sides. Even then ideas are left hanging; apart from one colourful hair slide and the pink dress, also worn once, she is soon dressed in her trademark grey.

I did love her rope noose plaits, and the song that school queen bee Bethany and her friends perform in the Assimilation town square. It’s an ode to fitting in, with the lyrics ”what’s so great about being yourself, when you can be like everyone else?”

You could say the dullness of the plot contrasts nicely with the brightly-coloured world Margaux is intent on creating, with the most disruptive element occurring at the very end when Margaux’s villainy is revealed and she gets off scot-free.

We’ve had so many children’s films about the joys of not conforming those movies now represent conformity. Which makes The Addams Family‘s not-too-disruptive pleas to be yourself but compromise, follow your own path but without throwing the baby out with the bathwater, rather revolutionary (though they would probably thoroughly approve of that if you did).

Note: There isn’t a mid-credits scene but the film does finish with the theme song and the lyrics on screen, if you or your children fancy a singalong.

Watch the trailer for The Addams Family and scroll down for chapter posters from the film: