You are here: Home / Film Reviews / Stanley A Man Of Variety 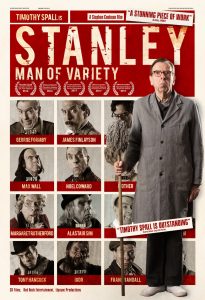 Stanley is incarcerated in a grim-looking institution, and has been for some years. He studies books in the library to assess whether he’s entitled to a hearing; or he’s cleaning the floors with his mop and metal bucket. Or he’s watching cassettes of old comedies, the shiny white brick walls of his narrow cell decorated with Radio Times covers.

We don’t see anyone else except the characters that Stanley (Timothy Spall) creates in his head, as he addresses his desperation to visit his daughter’s grave, and ultimately ponders a crime he claims he never committed.

This list of characters is long and mostly reads like a top-tier variety poster from long ago: Max Wall, Tony Hancock, Max Miller, Frank Randle, James Finlayson, George Formby, Alistair Sim, Margaret Rutherford – and all are played by Spall.

Stanley also conjures up his parents and a very strange prison doctor called Doctor Boob (based on a character played by Peter Sellers in 1968’s The Party, so now you don’t have to google that name unless you also want breast implants in which case you’re welcome).

Retreating into a fantasy world can be soothing, a safe place, but for Stanley it’s the opposite. Much of the film takes place as he hovers between this world and the next after trying to kill himself. It’s trial by comedy, as a succession of self-conjured stars give evidence against him and engage him in conversation as he navigates the realities of his past (and indeed what really is reality).

He’s not actually in prison – it’s the Estuary Island Psychiatric Facility, and initially all looks black and white, like the “facts” of the case which form the structural supports of Stanley’s mind.

Gradually more colour is introduced, sometimes just in the background and still in muted shades. Later it becomes brighter still, as Stanley and his comedians venture outside, and eventually back into his parents’ house, a vision of orange kitchen units and patterned wallpaper. The truth, however hard it is to admit, can offer a different a sort of freedom.

The drudgery and repetition of Stanley’s day to day life is laid bare in his institutional home. (I don’t know if it was filmed on a set or in an old building, but it looks like the kind of place brimming with more ghosts than just those conjured from Stanley’s tortured and guilt-ridden imagination.)

Most of these characters seeped into the UK’s national entertainment consciousness decades ago, and a couple are just about hanging on in there even now, via old TV clips and parodies. Even if you don’t know them, it’s clear from Spall’s portrayals that some were very influential on later, big name comedians. Still, I’m in my 40s and had to google some of them; I doubt many younger people will know who most of them are unless they’re fans of older films or older types of comedy. (If you take this opportunity to read around them, it certainly adds another layer of fascination for and appreciation of Spall’s roles here.)

And though Stanley is billed as a comedy mostly it’s more weird than funny. His Tony Hancock is an Eyeore-like joy, but it’s interesting rather than humorous. And if you find this style of old-style entertainment the comedy equivalent of nails down a blackboard, steer well clear. Spall is excellent but an audience still needs something to engage with (and ultimately I’m just not sure who Stanley‘s audience is meant to be).

At the risk of sounding rather like Stanley himself, the funniest moment involves a death. It’s a flashback to a perfectly dated bathroom – large and sunny with its bright yellow and green fixtures and fittings – the scene enlivened when Stanley throws an old-fashioned plug-in wireless into the bath water to get it to shut up. “It was just such a shame that my brother was in there at the time” he deadpans, as the body in the water literally turns into a skeleton while light fizzes around it.

Also enjoyable is Igor, that bearded lump beloved of schlocky horror films, always the assistant to some evil scientist and probably hailing from somewhere-in-Eastern-Europe. This Igor is rather a charmer in his own way, regular farts notwithstanding. He’s over the top but enjoyably so: “I am an en-EEG-mah!” he screeches, un-enigmatically.

This is a noisy film, despite Stanley’s physical isolation. The music is deliberately jarring. Seagulls squawk, violin strings screech. You can understand the pain Stanley is going through, unable to get his crime and these endless characters out of his head, as your own fills up with unpleasant noise.

I’m usually a fan of ideas left hanging, though here I appreciated that almost everything is explained, as it’s an unusual film that needs a completed narrative arc to balance it – particularly as so much feels episodic.

Cinematographer Ismael Issa has done a terrific job as Stanley’s world expands and retreats into both extreme suburban normality and absurdity. And it’s an incredible achievement from Spall, when you consider that these actors and comedians’ stage and film personas already included elements of caricature. He treads a line between embodiment and impersonation with extraordinary skill, so these people – increasingly slipping from public consciousness – are as identifiable as they could be without him simply mimicking them.

Order the DVD from Amazon uk

Order the DVD from Tribal Films

Watch the trailer for Stanley: A Man Of Variety: