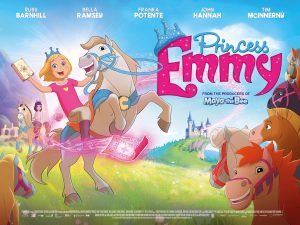 What small child wouldn’t like to be able to talk to animals? It’s got to be more interesting than listening to parents wittering on about “the olden days” (ie 1995).

Princess Emmy is what we should probably call a Horse Chatterer, a tween princess whose best friend is a horse called Ceasar.

There are 24 horses in the royal stables, and Emmy can converse with all of them. The secret gift has been passed down to Emmy (Ruby Barnhill) through the royal family, after Carlotta, a distant ancestor, saved a group of horses from falling from a cliff. If the current possessor of the gift loses the book Carlotta wrote, they will lose the gift for ever. (I’ll admit I was secretly hoping Carlotta would appear looking like a ghostly Princess Anne.)

At 75 minutes, it’s probably the perfect length for the five-and-under crowd; though while its animation is clear, smooth and simple (if a little pink!) the story itself feels confused.

Emmy lives in a castle, and her family seem like those down to earth European Royals, with hardly any servants and no ruling (the King, voiced by John Hannah, spends most of his day making muffins and cupcakes).

They’re looked after by Fionnuala (Clare Waugh), a very oirish elderly housekeeper; and have been joined temporarily by Vincenzo Cerimonata and Frau Zwickelmeier, brought in to assist Emmy as she prepares for the Princess Ball, perfecting all those princessy skills like piano playing and dancing.

Emmy has a friend, David (Nathan Mack), in the village, though he doesn’t know about her gift; and a cousin, Princess Gizana (Bella Ramsey), who comes to stay as they prepare for the ball.

Gizana and Emmy dislike each other, though Gizana is the better schemer. At one point she also eats all the cakes and if that doesn’t tell you she’s touched by evil then your Villainy Antennae need tuning.

Emmy also faces secret tests from beyond the grave, as Carlotta seeks to ascertain that the little princess is indeed worthy of the gift, which means travelling to Carlotta’s mysterious tower with Ceasar.

The story feels muddled, with all this talk of tests, the secret book and the Princess skills. I was confused and I’m 48. (My 7 year old felt the same.)

It’s still often quite fun – Emmy is a modern princess, and there’s lots of crashing and banging as she skateboards downstairs, or fights with Gizana. There are a couple of sharp lines. I liked the King’s jokey comment that Emmy had to do Princess Tests “to prove you’re posh enough”, and one of the horses commenting about humans that their “job is to love them not to understand them”.

Princess Emmy is a visual delight if you like pink and purple. Recent animated children’s films Leo Da Vinci and Charming, while neither is a stand-out, at least used a rich palette of colours. (Princess Emmy is based on the successful children’s book series Princess Emmy And Her Horses – they’re not books I’m familiar with but it may be that the aesthetics are reproduced from the books.)

There’s a message for parents here, that girls shouldn’t be shoehorned into tasks, particularly ones that are seen as traditionally female; and for the kids themselves that working together and being friends is more fun that fighting or succumbing to jealousy, and the loneliness that comes with it. It’s also about growing up, and how that doesn’t mean children should have to let go of important relationships.

As a one-off summer holiday watch for its target audience of younger children, Princess Emmy does just fine – though older siblings will be bored, especially considering the sophistication of so many children’s films now.

The voice cast are perky enough, though Joel Fry – who I loved in Benjamin and Yesterday – is rather wasted as Ceasar, who doesn’t have a lot to say. Combined with Fry’s soft and quiet delivery it means he doesn’t get to make his mark – much more of Emmy with the horses would have been welcome, but they only really get involved in the drama near the end (when it picks up considerably).

Ruby Barnhill’s bouncy, fresh-voiced and very un-regal delivery gives Emmy some get up and go, and makes her more accessible to children watching (unless the Duchess of Cambridge is planning on plonking Princess Charlotte and Prince George in front of it to give herself 85 minutes’ peace).

Watch the Princess Emmy trailer and scroll down for images from the film: