You are here: Home / Film Reviews / Jumanji: The Next Level 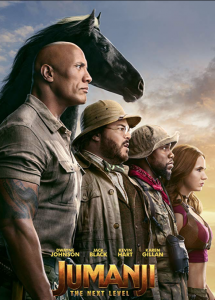 Like Olympians declaring on camera after winning Gold that they’re never going to run / row / swim again, the four teens who ended up in the Jumanji video game two years ago were adamant that was it.

No more sudden, shocking deaths before falling from the sky with one less life inked on their wrists. No more killer hippopotamuses. No more teen girl trapped in a middle aged man’s body.

The high school students – Fridge (Ser’Darius Blain), Bethany (Madison Iseman), Spencer (Alex Wolff) and Martha (Morgan Turner) – even smashed up the console, signalling the end of the game itself, though we discover near the start of this unevenly weighted sequel that Spencer went back for it and stored it in his basement.

Now he’s back home from college for Christmas, the euphoria of beating the game and finding new friends dissipated. He’s on a break from Martha, and just wants to feel like Smolder Bravestone (Dwayne Johnson) again.

It’s an odd message – that you need to be someone else to have value – though it’s probably pretty close to how many teens feel, and his desperation to again be the man who helped him to his greatest triumphs is understandable. It’s as if the Jumanji magic, once they’re out of the game, gradually wears off, like a positivity thread on social media that makes you feel on top of the world until a few minutes after stepping back into real life.

And it certainly plays into the pathos (Spencer’s loneliness when he sees his friends’ excited messages on their group chat) and the comedy (the first half of the film sees him and other characters given unexpected and different avatars in the game).

Spencer’s return home finds him sharing his bedroom with his Grandpa Eddie (Danny de Vito), who is staying with them while he recovers from a hip operation. Eddie has all the afflictions of old age and then some, needing an oxygen machine to sleep, though he cheerfully maintains his animosity to ex-best friend and business partner Milo Walker (Danny Glover), who turns up to make amends.

The added disruption at home convinces Spencer to go back into Jumanji, though the broken console means that when Martha, Fridge and Bethany try to follow him Bethany is left behind, while Eddie and Milo are sucked in.

Welcome To The Jungle was something of a surprise critical hit when it came out in 2017, and it’s one of the few films where I think I did it an injustice with my scoring back then (I gave it 3.5/5 but you can consider it a 4). I’ve seen it a few times since (my children love it) and its warmth, good nature and adventurous thrills never wane. Jumanji: The Next Level is a worthy successor, though you need to stick with it. The second half is more exciting, funnier and fresher than the first half, which feels like a retread. 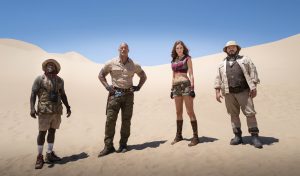 It’s part of the plot that the teens don’t like their new avatars (only Martha stays the same, as Karen Gillan’s Ruby Roundhouse). But there’s also an air of enervation initially, and Mouse, now inhabited by Milo, starts off simply being annoying, for us and the other characters.

There’s also a lot of standing round talking; partly because of Milo, who can only say something very slowly, and partly because Martha is constantly explaining what’s happened to the oldies (Grandpa Eddie makes an entertainingly bemused Bravestone). It’s not terrible, and there’s an exciting extended chase involving dune buggies and ostriches, but it feels tired.

But gradually Milo grows on us. Even his incredibly slow delivery, which often means they’re thrown into danger because he can’t explain something fast enough, finds its rhythm with the audience.

There are some good intergenerational jokes, as the old men find their hips work again; and a welcome use of Chris Isaac’s Wicked Game, when Smolder’s ex-girlfriend pops up in a bar (though I did feel for poor Spencer, having to witness his grandpa copping off). 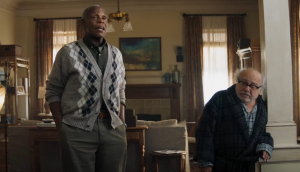 The two standout performances this time around are Kevin Hart as Milo as Mouse, and Awkwafina as Spencer as cat burglar Ming Fleetfoot (this time in the game they have to find a special jewel).

Hart has a more interesting role than most of the others and also manages to perfectly encapsulate Danny Glover’s Milo, from his speech patterns to his mannerisms to the love he had for his late wife. It’s pitch perfect, an uncannily accurate and very funny performance without being an impersonation. And it’s easily as touching as Jack Black was as teen queen Bethany in the last instalment.

A word too for the horse, Bethany’s avatar when she gets back into Jumanji with help from Alex (Nick Jonas). Bethany was the archetypal Instagram girl in Welcome To The Jungle, and has had the greatest journey.

The emotional heart of the film is the relationship between Grandpa Eddie and Milo. They parted on bad terms years before when Milo forced the sale of their restaurant business so he could retire and travel with his wife. The bristling anger that Eddie still nourishes pops up throughout the film, until their escapades in Jumanji force both men to face up to their actions and what they could lose.

The big change occurs half way through when they all discover a way to swap avatars. From then on the film is smoother and funnier, and paradoxically feels less like a repeat of the first one. The action and stunts are bigger, with some impressive new locations, and everyone gets to shine.

There are two standout action sequences: one where they’re chased in dune buggies by a flock of marauding ostriches, and later when they have to cross a lush gorge that is hung with half-length rope bridges that move around as they’re attacked by hoards of colourful mandrills. Both situations show how far and long director Jake Kasdan will push the action, forcing characters to continually up their game. The continuing relentlessness means they feel scary and exhausting – the raging monkeys repeatedly coming at them from every direction as the group tries to cross are genuinely terrifying. 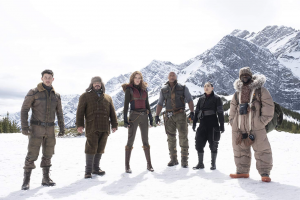 The ending is a sweet tearjerker, as for one character the benefits of existing in a game outweigh the dangers. Life back in normality isn’t such a draw for everyone anymore.

Jumanji: The Next Level works well as straight-up family fun (my 10 year old followed it easily, and thoroughly enjoyed it). The story is straightforward and there’s enough wit, heart and excitement to make this a compelling and hugely enjoyable spectacle.

I’m not sure where they go with a third film though, if they make one. It’ll need something very different that genuinely takes us to the next level.

Note: there is a short mid-credits scene, presumably setting the scene for another sequel.

Watch the trailer below and scroll down for character posters:

Jumanji: The Next Level – images