You are here: Home / Film Reviews / David Brent: Life On The Road 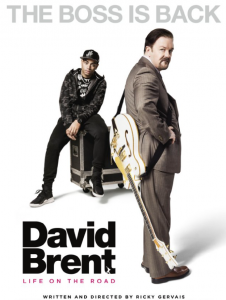 Life hasn’t been kind since David Brent’s redundancy from paper merchants Wernham Hogg. He’s had a breakdown and been on Prozac. But now he’s back to, dare I say, his best? And is determined to give stardom one last shot.

Brent’s self belief, surface-deep though it clearly is, strikes new heights, or depths, this time round. He is, he claims a triple threat: “Music. Comedy. Wisdom.”

Gervais too is a triple threat here, as writer, director and star; though he doesn’t seem to have spread himself too thin. Writing and embodying a man he knows so well must help.

Ricky Gervais has categorically stated that David Brent: Life On The Road is not The Office Part 2, but fans will notice Handbags and Gladrags, the old Office theme tune, playing in the background so I’m still going to start by reminiscing about The Office Part 1. Now let me settle into my comfy chair in front of the fire and tell you about that first episode the night it premiered on UK television…

Back then The Office‘s mockumentary style and the absence of a cheesy laughter track were still unusual on TV. And Gervais’s painful delivery was both too agonising to watch and too funny to switch off. Horrified fascination was a phrase meant for Brent-watching. The Office finished, quite movingly, on a high. And also before we all got to the stage of thinking Brent had moved beyond someone who was irritatingly hilarious and was now just irritating.

In this new film Brent is still irritatingly hilarious, though he also falls into plain old irritating mode at times. Admittedly his life is still drenched in pathos, so it’s hard to be entirely unsympathetic. Especially as time has moved on, for characters as well as audiences, and the supporting players are much happier to be downright nasty about Brent on camera.

Brent is now working for Lavichem, supplier of cleaning and personal sanitary products. But work and his personal life, now focussed on making a success of Brentertainment, still leak into each other: “I’m currently a singer-songwriter. And a rep” he announces to this new documentary camera crew, and as usual no work environment is safe from his painfully inappropriate brand of comedy. About the tampons he sells, he says: “One size fits all! They don’t really.”

So Brent is going back on the road, with his band Foregone Conclusion; him and a much younger group of paid musicians and a talented rapper, Dom (Ben Bailey Smith), who has to endure Brent’s constant references to him being black.

Dom tries to be kind to Brent and desperately tries to find something they have in common, though he doesn’t get far: “he’s white and old and his music’s terrible but…”

To pay for all this – the huge tour bus, Travelodge stays and mini bar bills – Brent is cashing in one of his private pensions as “some of them are worth what I put in now”. (You see, it turns out he was cleverer than us all along.)

But Brent doesn’t even get to enjoy the trappings of a musician’s life. The band can’t stand him and tell him there is no room in the huge bus so he has to drive behind in his car.

The songs are excruciatingly brilliant, perfect rhymes mixed with hideously offensive sentiments he thinks are synonymous with liberal do-gooders, a group he is desperate to join.

Luckily the audiences are tiny so hardly anyone gets to hear them. And when he’s not offending pretty much everyone, he’s belting out banalities like Slough:

“More convenient than a Tesco Express,
Close to Windsor but the property’s less.
It keeps the businesses of of Britain great,
It’s got Europe’s biggest trading estate…”

This is embarrassment comedy and at times it does feel past its best. The themes are repetitive when held against The Office, and within the actual movie. Sometimes it didn’t seem like a documentary team would be filming particular scenes. I mean, even considering the lack of self-awareness Brent has there were times when I just thought these incidents might happen in Brent World but not actually be filmed.

It’s certainly the product of a harsher world. Much as I would dislike Brent in real life the band are unpleasant considering he’s given them a job. In fact everyone takes his money even though they know it is a vanity project that’s doomed to fail. He’s not the on lay one; we self-publish and self-promote it with memes about how we don’t let failure stand in our way. The difference is he has zero self-awareness and has chosen a fake career that costs a fortune to self-fund.

Gervais is so good now at the tiny gestures, the little facial expressions that let the Brent down as a camera lingers on his face just longer than Brent’s ability to maintain his fake bonhomie. The funniest and saddest moments are these.

Brent has steeled himself to lie and laugh his way through his return to work after his failed tour. It’s perfectly pitched. Talking up his achievements, he claims it was the best time of his life. His listing of Dom and the backing band’s successes off the back of the tour is heartbreaking when you know how he has, through his own hubris and stupidity, spent a fortune to fail.

Actually writing this, and stuffing it full of Brentisms, made me realise that the it was funnier than I thought so I’m going to up its star rating. There.

Watch the David Brent: Life On The Road trailer: