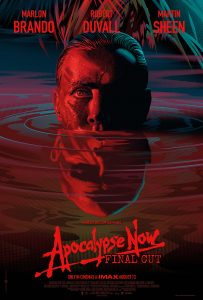 War is traditionally described as mostly boredom for its participants with short bursts of gut-wrenching, bloody terror, and this is no exception.

Often into that sliver of a gap between the two states fit extremes of behaviour and personality; those people who almost seem to thrive on the chaos.

Captain Benjamin Willard (Martin Sheen) and his crew, travelling upriver to kill a renegade colonel, interrupt their journey to rendezvous with Lieutenant Colonel Kilgore (Robert Duvall). Kilgore is a surfing fan who is delighted to discover crew member Lance is a US champion and actually sends his men out on boards while US attacks continue around them. (It’s Kilgore who declares “I love the smell of napalm in the morning!”)

It’s 40 years since the release of Apocalypse Now, Francis Coppola’s audacious anti-war war film. Only now are we getting the final, final, Final Cut, and in 4k. Apocalypse Now: Final Cut is three hours long, but it’s worth it. Actually it’s about 20 minutes shorter than Apocalypse Now: Redux, which came out in 2001.

Based on Joseph Conrad’s novel Heart of Darkness, this epic of cinema examines man’s descent into darkness, brutality and immorality. It’s a hot and sweaty three hours, and at times it’s hard to work out what is real and what conjured up in damaged minds.

The film updates the action from 19th century Africa to the Vietnam War, and moves from the original’s attack on racism and exploitation to a critique of American interventionism.

The story is well known: Captain Benjamin Willard (Martin Sheen) is ordered to venture up river from Vietnam to Cambodia to find and kill Colonel Kurtz (Marlon Brando), who is believed to have gone mad and has set up his own personal fiefdom. A previous officer sent to kill him is believed to be now working with Kurtz (an intercepted letter from the man to his wife tells he he’s not coming home and to sell the children).

Willard’s task mimics America’s involvement in the war – it’s probably unnecessary and certainly dangerous, and costs many lives. His journey takes him as near to Kurtz as possible without destroying himself, but it’s impossible not to be tainted by the voyage or the man he’s hunting.

It’s almost languorous at times, that oppressive stillness, as the boat chugs upriver, interrupted by war, though even when nothing’s happening we’re waiting. These interruptions can feel episodic but like a war the film has its own rhythm, and it’s one that the very long running time feeds into. The length also means that the ending seems eminently fitting, as we’ve slowly moved with Willard closer to Kursk and his madness. (It was certainly a shock emerging from the screening room into a London summer evening; everyone seemed to be processing rather than giving their definitive verdict.)

There are several stops along the way including at a French plantation, inhabited by a glamorous upper class family still dressing for dinner. I did wonder if the inhabitants were even meant to be real, so incongruous and dreamlike is their situation; though it’s probably just one more example of Western hubris. The patriarch is furious at the country’s losses in World War 2 and others, and is determined to hold on to this little enclave, whatever the cost. And despite the nice house, colonial furniture and elegant women the cost has been considerable. (People have mixed feelings about this section but I liked it; it jolts us out of what we’ve come to see as normality.)

Tensions and splits in the crew – Chief (Albert Hall), Lance (Sam Bottoms), Chef (Frederic Forrest) and Mr Clean (a very young Laurence Fishburne) – and attacks that leave several dead, add to the sense of underlying disorder and turmoil before Willard even reaches Kurtz’s jungle home. Once there, the fevered atmosphere is only heightened by the ritual slaughter of a water buffalo.

The myths and legends that swirl around the  making of Apocalypse Now somehow simply add to its cultural and artistic weight and significance without overshadowing it. (To describe production as problematic would be a massive understatement: a typhoon destroyed some of the sets, Martin Sheen had a heart attack, Brando arrived too overweight to play the role as written and Coppola was almost bankrupt by the end.)

He may have been out of shape but Brando’s performance is still extraordinarily sinister and disruptive, matching Sheen’s almost crumbling Captain. Kurtz is usually in darkness or half lit, orange and black. His diatribes nearly start to make sense, so discombobulating has the journey been, as he pushes home the idea that to succeed, man must be both morally virtuous and prepared to do unspeakable things. It’s cognitive dissonance made into a way of living. To Kurtz, it’s obvious that the war would have been over much earlier and would have killed far fewer soldiers if more had been prepared to act like that. Instead thousands upon thousands of unprepared young men, fighting against their nature, were actually dragging out the conflict and making it worse.

The madness has a lushness to it, yet the film reminded me of Dr Strangelove, also re-released in 4k this year. Their aesthetics are miles apart but the dangers posed by war situations which require men to be crazy in order to survive or even thrive feel similar.

Visually this is an astonishing film, which hasn’t lost any of its ability to astound despite so much of it seeping into popular culture. This new 4k restoration just makes it more visceral. The helicopters flying across the sky to the sounds of Wagner’s Ride of the Valkyries with a percussion of bombs and machine guns, the white-painted local people populating Kurtz’s strange, nightmarish and throbbing little kingdom, and the final sacrifice still have power even after four decades.

Watch the new trailer now and scroll down for images from the movie: