You are here: Home / Film Reviews / A Vigilante 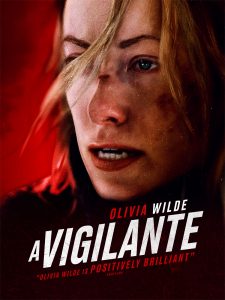 I like this movie’s title – a vigilante, not the vigilante, which would have positioned this as just another exploitation piece. Sadie, herself a survivor of horrific abuse at the hands of her husband, is not out for acclaim but wants to sink into the grey shadows.

It also suggests there are more out there, helping women and children in the most direct way, which is comforting if probably not true.

“I want to kill you” Sadie whispers to an abuser, with the emphasis on “want”, after she’s told him what will happen to him if he doesn’t sign over most of the family assets to his wife and then leave, never to return.

We first meet Sadie (Olivia Wilde) ageing her appearance while listening to a YouTube video about adding Latex wrinkles. When we see her in her disguise, a long plain wig tied back at the nape of her neck and wearing dark, nondescript clothes, she’s middle-aged, probably the easiest age to go unnoticed for a woman.

She’s in this house to speak to a middle-aged, middle-class man, who we’ve just seen having his coat eased off his shoulders by his wife, her arm is in a sling. Sadie doesn’t kill but when he tries to hit her it turns out to be a bad idea. Later, his white shirt covered in bloody smudges and with red fingerprints on his keyboard, he does as she originally asked, then leaves with a suitcase.

Olivia Wilde is spectacular in A Vigilante, as a woman who frees other victims from their partners or parents. It’s a tour de force performance. When Wilde isn’t calmly resolute, carrying out the tasks Sadie has set herself, she’s screaming like a wild animal, teeth barred and eyes bulging, or scrunched on the floor sobbing at her memories.

Sadie has changed her hair since escaping her husband, but when she takes out those coloured contact lenses and wipes off the make up we also see her back covered in knife scars, indelible evidence that she can’t get away from. I got the feeling that Sadie realises she can’t escape the physical or mental truth of what happened to her so she might as well absorb it and and use her experiences to fight back for other people. It doesn’t look like self-help therapy and I never felt that she was searching for some kind of peace. While it’s partly retribution as catharsis, that catharsis is incidental to her aim, which is simply to rescue victims.

Thanks to her abuser she feels she has nothing else to live for, so why not put that unwanted, unasked for freedom to good use?

Though we see Sadie in flashbacks, we don’t see her past before she met her husband, which reinforces the feelings of isolation and loneliness (at one point she tells the counsellor she has no friends because her husband’s financial abuse meant she couldn’t go out). She’s constantly using the separateness he forced on her to get back at him and people like him.

Sadie’s escape from her husband is a horrifying story that takes up the second half of the film. It’s a very hard watch even though we know she survives (in some form). Her nameless husband, played by Morgan Spector, is vicious, needy and narcissistic. But we see a lot of violence against women in films, and brutal as his actions are, what is striking here is seeing Sadie physically change into someone ready and able to fight back. Psyching herself up, she’s like an animal, her eyes rolling and her arms flexing, ready for him. It’s an essential transformation, as her heroics and her triumphs are of a very human kind.

A Vigilante feels quiet, with any noise seeming to split the air, whether it’s her fists smashing into her punchbag or lorries screaming along the roads. She’s utterly singleminded and focused, leaving no detail uncovered. Her wariness is that of someone who’s been caught out before. The calm belies the danger she knows she’s in: “You wouldn’t be safe with me” she tells a child who wants to come with her.

This is a spare movie, with no distractions. It often has a washed-out, sepia tone, which works with the cheaply furnished rooms she stays in – with their neutral colour schemes of beige and grey and brown. She’s living in a deadened world, brought alive by her actions.

This does sometimes feel like two different films, so different are the first and and second halves. It’s a jolting switch that just about works, with the solitariness of both sections providing a link. Once the movie does stray into schlocky revenge territory, but only briefly.

This is a first feature from writer-director Sarah Daggar-Nickson, and it’s an impressive, grimly believable debut. She navigates a topic that is often presented exploitatively with understanding and skill. Her heroine, held together by cold, channelled rage, is surprisingly believable, though that’s partly because we want to believe.

There’s a little moment when Sadie’s group counsellor Miss Beverley (Tonye Patano), forced to work by the book even as it fails women daily, finds out about Sadie’s direct action plans. Her reaction is controlled satisfaction and grim acceptance. She’s been trying to help women but knows full well how many are still out there, unable to get help.

A Vigilante is available on VOD, DVD and blu-ray from amazon.com

Watch the trailer for A Vigilante and scroll down for images from the film:

Spoiler: During their marriage Sadie had tried to leave with her son, but her husband had come after them and killed the child. At the end of the film she kills her husband.