You are here: Home / Film Reviews / Shaun The Sheep: Farmageddon 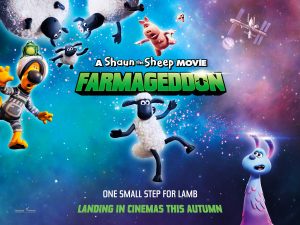 The joy when writing about Shaun the Sheep movies partly comes from not having to spend time afterwards trying to decipher key quotes that I’ve written down in the dark.

No one actually speaks, except to utter the occasional “arghhh!” and “ugh”, and though I’ve often scribbled those exact words in response to other, lesser films, they’re not warranted here.

Farmageddon is full-on family fun. Though this rainbow-hued story of farm animals and friendly aliens is aimed at under-10s, any parents, carers or older siblings on babysitting duty will have a ball spotting the nods to other sci fi movies and TV shows, which come so fast that any that don’t hit the spot are quickly forgotten. (Watch out particularly for the 2001: A Space Odyssey monolith, and a terrific Doctor Who / portable toilet gag, made all the better because it involves MY DOCTOR.)

It even manages to includes a strong message about the uneven state of rural mobile phone coverage in the British countryside.

You know that point in a movie where you finally feel seen, and sink into your seat with your popcorn knowing this one is for you? I used to live in the middle of nowhere, every phone call preceded by my going to the highest point in the house and hanging out of the window for a measly one bar of signal, only to be thwarted if it was drizzling a bit because, you know, clouds.

So when Shaun – wielding an egg-shaped homing device that just might mean rescue for little alien Lu-La by her family, currently residing on a planet far, far away – started the laborious climb up a rickety tower while the signal bars on the egg gradually increased, I was both on the edge of my seat and cheering him on.

The joy of Aardman films – beyond their incredibly detailed claymation techniques and delightfully realised characterisation – is their ability to ooze Britishness while making our quirks understandable to worldwide audiences.

They get that when we’re not screaming in frustration after ten minutes trying to make a simple phone call because there’s a massive tree with a preservation order on it in the way, we’re on a lifelong quest for the perfect bag of chips. Which explains why a Mossingham local, running off in terror after spying Lu-La’s spaceship landing in the woods, bravely returns for his dropped chips. How could he not? They’re gold and crispy on the outside, thick but not unwieldy, fluffy inside, and absolutely throat-burningly hot.

And in these divisive and troubled times, Farmageddon states that true Britishness is about looking outwards with a smile, not inwards with a grimace: of befriending visitors, working together, and finding common ground despite barriers of culture and language. When Shaun discovers Lu-La (Amalia Vitale) in a barn on the farm, he’s not frightened and they’re soon good friends.

She wants to go home, having, to quote Withnail and I, “gone on holiday by mistake”, but getting her back to her planet is no easy task – especially as the Ministry of Alien Detection (MAD) are on the trail of Mossingham’s now-famous UFO, and Lu-La.

Meanwhile with tourists flocking to the area, the farmer puts the rest of the sheep to work building his alien theme park Farmageddon. It’s 30 quid a pop to get in, and the attractions are the same quality as the ones in Daily Mail articles about terrible Christmas days out when families turn up, having paid a fortune in tickets, only to find a cow with antlers stuck on its head, a manky hay bale and two elves drinking Stella in Santa’s grotto.

Lu-La makes for an inquiring and able heroine, moving objects simply with the power of her ears; and I loved her visit to the supermarket, an extended skit which remains funny until the end, never dipping in its energy or gag hit rate. (I should warn you that it does have one truly terrifying moment, when Lu-La getting her tongue stuck to a frozen pizza, a scene which still torments my dreams now.)

Shaun (Justin Fletcher, a man who having starred as both the world’s most famous sheep and Something Special‘s Mr Tumble should really top any “most powerful” entertainment list, his feat akin to playing both James Bond and Batman) is still funny and cheeky, while determined to help her find her family.

Farmageddon doesn’t quite reach the heights of Shaun’s first film, or some of the other classic Aardmans (though being a film fan rather than a football fan, I preferred this to Early Man). It’s partly because the best segments are those involving Shaun’s friends rather than Lu-La and Shaun, the woolly flockmates determined to live their lives to the fullest no matter how much it torments poor Bitzer the farm dog.

Life at Mossy Bottom Farm hasn’t really changed since the first (excellent) Shaun the Sheep movie. The farmer (John Sparkes) is still lazing around in a jumper and red y-fronts, though now he’s salivating over the thought of a new combine harvester if he can only monetise the area’s newfound fame as an alien hotpot, I mean hotspot.

Shaun and his fellow sheep clearly follow the old mantra that it’s better to apologise afterwards than ask for permission first, only without the apology bit. For them anything not already explicitly banned on the farm is perfectly acceptable, and their infectious taunting of Bitzer will hit the spot with children sick of being told “no” by their parents and parents sick of being told “no” by their managers.

I’ve just realised I’ve got through the whole review with only one pun. So let me just say that Farmageddon is a shear delight that rejects sheep thrills as it spins its yarn. And while the movie references occasionally feel rammed in, overall it’s offally good. (There. In the words of Russell Crowe’s Gladiator, “ARE EWE NOT ENTERTAINED?”)

And of course it all ends happily, with the cuddliest group hug on record.

Watch the A Shaun The Sheep Movie: Farmageddon trailer and scroll down for posters from the film: