You are here: Home / Film Reviews / A Reindeer’s Journey 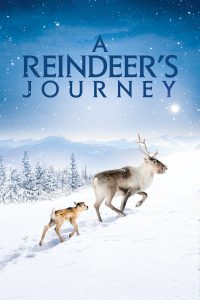 Part informative documentary, part anthropomorphic family film, this story about the first year in a reindeer calf’s life is a captivating and stunningly beautiful journey, as reindeer calf Aïlo grows up in the ancient forests and valleys of arctic Lapland – its remoteness no protection from the realities of climate change.

That anthropomorphism sometimes grates, though it will undoubtedly appeal to children, watching little Aïlo navigate his way through a new and chilly world.

Overall the good in A Reindeer’s Journey outweighs any overreaches in the animal characterisation, and I can accept even those when its message is delivered by the sonorous Donald Sutherland. Besides, the script does try to balance the portentous with the droll: while Aïlo may be destined to be “a prince of Lapland”, the poor little lemming with which the reindeer shares the wintry environment is “the chicken nugget of the Arctic”.

The poster makes out this is a festive treat, and it is, but it also does an excellent job of explaining the hardships and realities of a reindeer’s life in the arctic circle: its threats (both natural and man-made), and how reindeer and other animals fit into the natural world (black crows alert wolves to prey as they know they’ll get the leftovers).

Aïlo, a reindeer born when his mother’s herd is en route from the freezing mountain tops to warmer pastures down below, has a lot to face in his first year: simply surviving in the icy temperatures is hard enough, and half of all reindeer calves don’t make it to their first birthdays. Wolves are an ever-present danger, with the encroachment of loggers putting more pressure on the natural environment and the routes these herds have trekked for centuries. Even his birth is made more hazardous because of climate change; he should have been born down in the valley himself, but temperature changes have confused reindeer does. 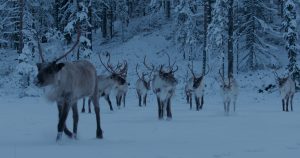 Smaller children may find the film frightening; actually I was on edge myself. My 7 year old and I were gripped by little Aïlo from the moment of birth, even though we knew that, realistically, he wasn’t going to die in those first few vital minutes. His mother has to leave the herd to give birth to him, and waiting for the newborn Aïlo to stand – still wet and surrounded by snow – is agonising, especially when Sutherland intones the rules of the game: baby reindeer have five minutes to learn to stand, five to learn to walk and five to learn to run and swim. It takes Aïlo far longer, and at one point his mum simply runs off, before returning to feed and warm her calf.

Once he’s upright, their trek back to the herd – already safer in the valley – requires the newborn to cross a freezing, rushing stream. But manage it he does, emerging victorious on the other side to sighs of relief from our sofa.

Several other animal species have roles in this story (we don’t see a single person): wolves, bears, squirrels, arctic foxes, rabbits, white stoats and polecats, all of which I know more about than before. I hadn’t even seen a real wolverine (imagine a bear crossed with a stoat but with long sloth claws).

While Aïlo totters through the landscape, a white stoat twirls and jumps on the thick white blanket, and the wolverine misses out on a partner because it’s acting like a daft teenager in the snow. An arctic fox has fewer chances to waste as it searches for a mate, as there are only 200 of them left in Lapland, and they mate for life. I may be against imbuing animals with human traits but I did really feel for him when he spotted a potential mate then realised she already had several cubs (so many cubs, scrambling over each other to get to their milk). 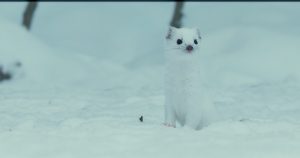 A Reindeer’s Journey was filmed in Finnish and Norwegian Lapland. We went to the adjacent Finnish national park last Christmas, on one of those brief festive trips to husky-ride, see reindeer, and, by meeting the real Father Christmas, ensure my children remained true believers for another 12 months. The snowy trees in A Reindeer’s Journey, so weighed down they look like a forest of grey-white triffids in the silent twilight, were just as gorgeous as I remembered in their low-lit stillness.

Those calming, wintry scenes may be the most serenely beautiful to us, but they’re also the harshest. For Aïlo those first months in the relatively hospitable valleys, the snow replaced with wiry grass, brushy undergrowth and forest, give him a chance of survival, though danger still lurks. A wolf watches from a rock, returning later with her growing cubs; a logging truck, its headlights like glaring eyes, approaches noisily through the woods, the roads it needs cutting straight through old reindeer trails.

Sutherland’s voiceover may be on on the side of Aïlo, but other wildlife isn’t demonised (the wolf is a predator but also a mother trying to feed her cubs), nor is actual death ignored. Reindeer do die, and a lemming is introduced only to be snatched by a hungry snowy owl. Even their demise can be fascinating: if you’ve ever wondered what happens when two stags fight and their antlers become tangled, you’ll soon find out. 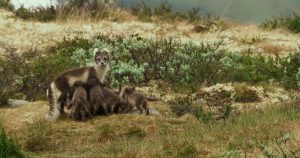 An arctic fox and her cubs

A Reindeer’s Journey is a gorgeous film. When colours are bright they are very bright; even before Aïlo reaches the land beneath the bright pink and green aurora borealis, the skies are rainbow gradations of pink and blue. Down in the summer valleys, the fjords are dazzling azure; autumn landscapes are orange overlaid with white mist.

When winter sets in, a world that initially looks smooth and white is anything but: cinematographer Teemu Liakka and DoP Daniel Meyer have done a lovely job highlighting the different colours and textures in a freezing world. The music signposts all the animals’ antics, from growing threats to playful bouncing.

But this is the reindeers’ movie: majestic and stoic, they trudge through fog and blizzards, antlers as weighted with snow as tree branches, icicles hanging down.

A Reindeer’s Journey opens in New York on November 15, and is available on demand and on digital on November 19, 2019.

Read our kids’ review of A Reindeer’s Journey.