You are here: Home / Weird Movie Shit / Leaving Food And Storming Out 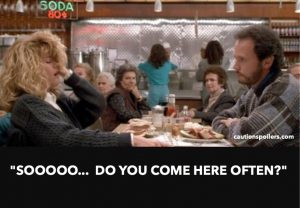 Why oh why… this is NOT how normal people eat, is it?

I don’t think I’ve ever seen anyone eat a full meal in a movie scene (apart from Big Night, a fabulous food fest film with Minnie Driver that you’ll end up walking out of because you’re so bloody hungry). In fact in films people are constantly leaving perfectly good food uneaten because of a row. Usually this involves starting to put some food to their mouth with their fingers or a fork and then getting so angry, so quickly, they flick the food back onto their plate in disgust, get up and walk out:

1. leaving the other person to pick up the bill/check.

2. not taking their food with them in a box to eat at 1am, the universal sabotage-the-previous-day’s-healthy-eating hour.

WHY? They’re still hungry, presumably. Is it because film people are so used to (a) getting their own way and (b) never eating, that they think they’re injecting a healthy dose of realism into their projects?

It would have to be a pretty bad argument (think “I’ve sold my house and given the proceeds to charity / I’m attracted to cats / It’s not me is you / It’s not you it’s me / I no longer eat bread, dairy, eggs, sugar or caffeine” type disagreements) for me to leave food and walk away. I’d usually continue eating it whilst trying to look as if I’m intelligently digesting <food joke> the bombshell and coming up with a thoughtful, measured reply (perhaps “you fucking dickhead, I’ve always hated you AND SO HAS MY CAT, so don’t get any ideas buster, now piss off!”).

The content doesn’t matter, the point is it would be enunciated AFTER I had finished everything on my plate. And ordered pudding. And coffee, in case it comes with those cute petit fours.