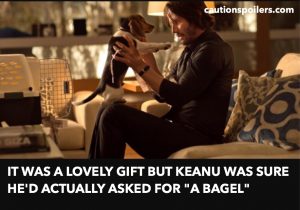 I can honestly say I have NEVER had so many imaginary exclamation marks whizzing round in my head since I started reviewing films. I LOVE wtf? moments in movies though.

Clunky, major plot hole-causing, or simply unexplained and then never spoken of again, they may be caused by simple errors, bad editing, or just someone a bit dim being in charge that day.

These are some of my more recent favourites, feel free to add yours in the comments.

Shakespeare, darling, which means yet another completely unlikely case of face-blindness. In this case the Roman general Coriolanus (an amazing Ralph Fiennes) has grown a beard and his hair has got a bit shaggy, but he still looks EXACTLY like Ralph Fiennes, and he goes to meet his sworn enemy Aufidius (Gerard Butler, brilliant now he’s got Shakespeare writing his scripts). Aufidius completely fails to recognise Coriolanus and we get one of these loooonnnnnggggg speeches in 17th century English which translate as “Eh? Who are you?” when we’re all shouting at the screen “Gerry mate! It’s fucking Voldemort!!” 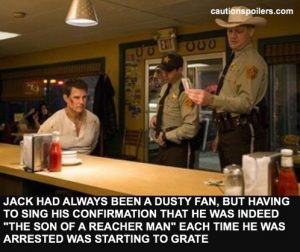 One of those films where it’s hard to pick out the daftest of the daft scenes, though this is near the top of the list. Jack is in a military prison cell but pretends to have some sort of low-carbing dizzy spell. So he asks the military woman in charge of him to go and get him a sandwich. And she does! Leaving her handbag INCLUDING THE CELL KEYS on the table. So of course he unlocks the door and walks out (I’d have waited for my sandwich personally). Completely unbelievable especially as almost all 30-something women either have kids or are aunties or see friends’ kids which means there’s a 93% chance that somewhere in their handbag there will be about four of those teeny boxes of raisins which she could have given to Jack Reacher to restore his sugar levels, handing them over with a Military Prison Woman 1 : Jack Reacher 0 smirk.

Oh god most scenes. I quite enjoyed it, but I kept waiting for them to be really bad and they never were. They drank milk in the supermarket, and danced on some tables, and she had a hangover and left the kids downstairs and went upstairs with the tortilla chips for breakfast, and I think she may have left work early one day. That’s normal life isn’t it? ISN’T IT? (It was written by men though, and the whole plot of Bad Moms is pretty much what women tell their other halves when they are massively downgrading what that PTA night out was really like. And then the other halves downgrade their own evening to Giant Bush Lady). 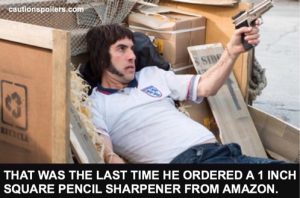 Or the ridiculously titled The Brothers Grimsby if you saw this in America but you didn’t as apparently no one did. No one at all. I saw it over here and I really liked it. It’s rude and stupid and ugly but frankly those are MY PEOPLE and it’s nice to see diversity on screen instead of thoughtful clever scientists in Arrival who don’t scratch their bums in public all the time. Anyway there is a scene where Nobby and his posh brother Sebastian (who’s surname IS NOT GRIMSBY) hide out in an elephant’s vagina. And then a male elephant comes along and… and… It’s definitely an upper case WTF! moment plus there are lots of lower case wtf! moments in there too. Not a film for the faint of heart/fart.

I know, I missed it off my “Worst Films of 2016” list as it had suffered enough. But it’s 2017 now and I’ve had enough of being nice, so let’s bring it back for another kicking. When all the gods of Egypt gather for a little faaaamleee celebration which – like a Christmas Day wedding in Eastenders – you know is going to end in bloodshed, the gods are all enormous and the humans are all tiny. But it just looks a bit like perspective as the gods are on a high stage at the front and the humans are all down below, in the background. My 4 year old has just finally understood near and far and sizes, and loves holding up his thumb to a distant tree and laughing hysterically while saying “look Mummy my thumb is as big as that tree!”, so he’d love it.

So Felicity Jones is a child prodigy British doctor and she’s so clever that when her grandad, sorry I mean Tom Hanks, shows her a little gizmo made of bone not only can she deduce instantly that it’s bone but that it’s HUMAN BONE. Which I could understand if it looked like a finger, or if it was a skull with maybe a candle in it like one of those hideous homemade crafts on your local Facebook selling page, but it wasn’t. 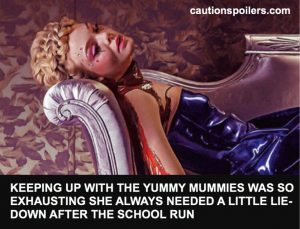 This film did make it onto my worst films of 2016 list though it could also have gone onto a best of list, it’s that kind of crazy movie. One of those allegorical po-faced films where we are expected to take some very obvious idea terribly seriously while you know everyone in it was pissing themselves laughing between takes. Anyway, near the end of the film, model Gigi starts choking and gagging and – after about 20 painful minutes – she coughs up a human eyeball (I knew it was a human eyeball because I asked Felicity Jones). In that time my cat could’ve coughed up 5 furballs of varying densities and stopped to look disdainfully at me as I cleaned it up between each one.

A bit like attacking Gods of Egypt, having a go at Passengers seems like kicking a kitten, it’s taken such a pasting – or it would be if its creepy stalker premise didn’t absolutely deserve it. But stepping away from that, what else can we find in Passengers that just doesn’t make sense? Well how about the hibernation pod that Stalker Jim offers Stockholm Syndrome Sufferer Aurora at the end, so she can go back to sleep for 89 years and wake up with the others when they reach their destination, the colony Homestead 2? And she says “No Stalker Jim, I want to stay with you for all eternity, well for the next 70 years until we die, but it’ll feel like eternity, while you drink your way through all the posh coffee thanks to my Upper Class ticket”. Really? Even if she said NO to start with, does anyone really, really think that a few weeks, months, or even a year down the line, after another argument, and nowhere to really strop off to, she wouldn’t be shrieking “Put me in that pod NOW you DICKHEAD!”

The product placement. So much of it! So obvious, and so unnecessary! And it’s not as if it even worked, I mean who even saw the film and remembers that there were several scenes involving hiring a new kind of taxi for a short journey, or drinking the type of alcoholic beverage that George Clooney favours, or buying a new car that’s large enough to fit in several people all at once but isn’t a station wagon. Or a desktop computer typically found in offices that rhymes with Bell. Or that everyone would have Ego-Phones (actually that’s just real life for office techies isn’t it). Not me, that’s for sure.