You are here: Home / Trailers / We’re all going on a summer holiday, no more working for a week or two…” NOT YOU SPIDEY! 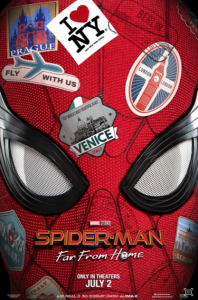 Peter Parker is off on his holiday travels and we have three NEW posters to prove it: Berlin, Venice and London.

I’ll admit that when I first saw them I assumed it was some film festival-related publicity drive, though actually he’s following my exact route Interrailing across Europe back in 1991. (Don’t worry I won’t bore you with the photos.)

I need the official blurb for this one, as sadly I’ve never seen a Spider-Man movie.

(Worse than that, I’ve never seen Point Break though obviously I tell everyone I have.)

“Peter Parker returns in Spider-Man: Far From Home, the next chapter of the Spider-Man: Homecoming series! Our friendly neighborhood Super Hero decides to join his best friends Ned, MJ, and the rest of the gang on a European vacation. However, Peter’s plan to leave super heroics behind for a few weeks are quickly scrapped when he begrudgingly agrees to help Nick Fury uncover the mystery of several elemental creature attacks, creating havoc across the continent!”

Check out the posters and images below and scroll down for the first trailer, released in January.