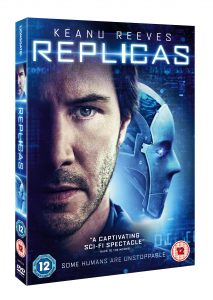 I can’t think of anything more terrifying to hear after waking up from an accident than “try to relax, you’re coming online”, even if it is Keanu Reeves saying it – but that’s what a previously dead man is faced with after Will Foster, a scientist more misguided than mad, tries to imprint his brain into an android.

Foster (Reeves) is a synthetic biologist on the brink of a huge breakthrough in his work transferring human consciousness into a robot.

Then his wife and children are killed in a car accident, and he takes the decision to clone their bodies and implant their minds and memories. Soon Foster and his cloned family are on the run from the police and a sinister government-run laboratory.

This April, Replicas – the Keanu Reeves sci-fi cloning thriller – is FINALLY coming out in the UK on VOD, DVD and blu-ray.

I say sci-fi, we’ve waited so long since that first teaser dropped at Comic-Con in 2017 (if I could put dates in caps for emphasis I would) I was worried by the time it got to us it would be less science fiction and more cautionary “it must never happen again” documentary.

And I’m fascinated by cloning precisely because it should never be allowed to happen. Despite the potential benefits to the world of several versions of me running around, there’s only one real *me* and you all know it.

I’m currently developing a KeanuBot to put up my shelves

Replicas seems to be about grief and loss as much as the dos and don’ts of cloning though, as Will has to explain what he’s done and why to his wife, who finds out she’s actually already dead.

The trailer does, unfortunately, include the line “but what if something horrible goes wrong!”, a great example of a sentence going horribly wrong. Though it’s now so deeply imprinted on my brain that I’m going to be waiting for it throughout the movie, like when you go and see Hamlet and you don’t actually want to hear “to be or not to be”, but you can’t settle until you have.

Starring Reeves, Alice Eve as Will’s wife Mona and Thomas Middleditch as his colleague and partner in crime Ed, Replicas is directed by Jeffery Nachmanoff. The film is available in the UK on digital download from 22 April and Blu-ray & DVD from 29 April. It’s released by Lionsgate UK.

Check out the trailer, Keanu Reeves / Alice Eve interview and images from the movie below.