You are here: Home / Trailers / First trailer: True History of the Kelly Gang

Bush-ranger and outlaw Ned Kelly has apparently had more biographies written about him than any Australian – this film is “rousingly adapted” from Australian writer Peter Carey’s novel of the same name, which was published in 2000 (and won the Booker Prize).

The film premiered at the Toronto International Film Festival (TIFF) last year, and is released in UK and Irish cinemas on 20 February 2020. It stars George MacKay as Ned Kelly, and while the trailer looks good I may struggle to get past his terrible haircut. 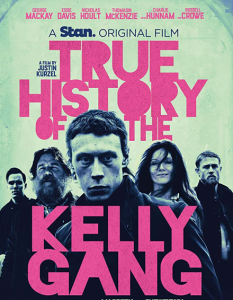 “Kurzel’s film shatters the mythology of the notorious icon to reveal the essence behind the life of Ned Kelly and in doing so will take audiences on a mesmerizing journey into the ashes of this brutal period in history. Spanning the younger years of Kelly’s life and the events leading up to his death, the film explores the motivations for the demise of this legendary figure. Youth and tragedy collide in the Kelly Gang, and at the beating heart of this tale is the fractured and powerful love story between a mother and a son.”