You are here: Home / Trailers / Dr Strangelove, back with a 4k restoration and probably Twitter’s longest ever hashtag 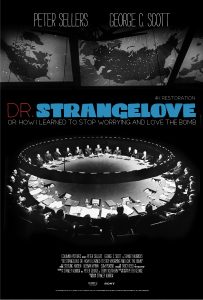 Growing up in the 80s, when I wasn’t crimping my hair and listening to Duran Duran berating me for being “about as easy as a nuclear war”*, I was worrying about surviving one.

I still am! But while the world’s heading towards its doom right now, stop digging that fallout shelter for a minute – as I’ve got some good news for you.

A new 4k restoration of Stanley Kubrick’s classic Dr Strangelove: Or How I learnt To Stop Worrying And Love The Bomb will be out released UK cinemas in May.

The (very) black comedy is about a US general who launches a first strike against the USSR – leaving American President Merkin Muffley and British RAF officer Group Captain Mandrake desperately trying to recall them before the End Of The World is triggered.

Park Circus and Sony Pictures Entertainment are releasing the restored version in UK cinemas on 17 May – and the movie will be preceded by a short film, directed by Matt Wells – Stanley Kubrick Considers The Bomb – about Kubrick and his film.

Dr Strangelove will also have an extended run at the BFI Southbank, as part of their Kubrick season.

Check out the new trailer below, for the film and the new short – and scroll down for images from the film:

Still worrying? Check out these stills from the movie

*Is There Something I should Know, the first single I ever bought (1983)