You are here: Home / Trailers / Look smart, the “Booksmart” trailer is here 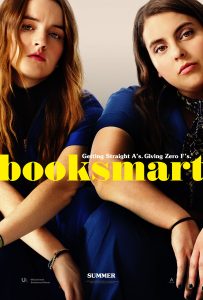 Remember girls, if people try to pull you down, “fuck those losers. Fuck them in their stupid fucking faces”. (That’s a metaphor. I think.)

Comedy Booksmart has already premiered at the SXSW film festival, and now we’ve got a trailer too. It’s the directoral debut of Olivia Wilde, and judging by this it’s going to be a hoot.

Though being a million years old my first question about these dewy-skinned teens was “you’re old enough to drive? And you have a massive car?”

Amy (Kaitlyn Dever) and Molly (Beanie Feldstein, so fantastic in Lady Bird) are straight-A students who have worked and worked to get into their chosen colleges. Now it’s the last day of high school and they realise all the fun they’ve missed out on. It’s especially galling as it turns out the drunk fun kids also got into the same colleges. So the girls give themselves one night to make up for lost time.

The trailer soon hits its stride, and if the film is as good we can look forward to a real treat.

Booksmart is written by Susanna Fogel and Emily Halpern and also stars Lisa Kudrow, Billie Lourd, Jason Sudeikis and Will Forte. It’s released in the US on 24 May and in the UK on 27 May.

Check out the trailer below, plus soundbite interviews with director and cast at the SXSW premiere and images from the movie: