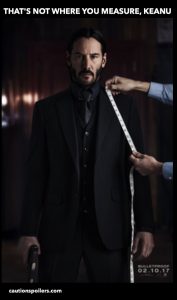 A teaser poster for “John Wick – Chapter 2” has been released, with Keanu being measured up (a job sadly I didn’t see advertised).

Just as long as they make them with enough room for, er, what’s it called again? Oh yes his gun.