You are here: Home / Lookalikes / But seriously… check out this Inferno movie lookalike 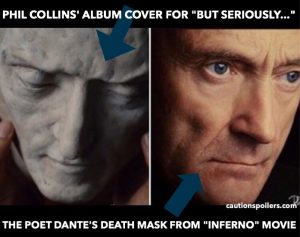 So I went to see Inferno this week (see my Inferno movie review here – though “abandon all hope ye who enter” is a good summary, plus running). And it’s got Dante’s death mask in it!

If you haven’t seen Inferno – and frankly who can blame you – and poetry isn’t really your thing, Dante was a Late Middle Ages poet who was born in Florence. He wrote an epic poem called The Divine Comedy, with a first section called Inferno, which describes Hell in great, tormented detail.

Anyway in the film Dante’s death mask is stolen. But while desperately trying to follow Tom Hanks and Felicity Jones as they ran around key Florentine landmarks and endless art galleries, I noticed that the death mask bore more than a passing similarity to Phil Collins’s re-released album cover for “But Seriously…” (not a phrase you’ll hear again in relation to Inferno I think).